Alfred R. Doney, 86 years old, former long-time resident of Guttenberg and Civil War veteran, died at his home at Cedar Rapids, friends in Guttenberg received word to that effect. Deceased was born at Joliet, Ill., on June 3, 1846, where he received his early education and grew to manhood. After residing 28 years in Guttenberg, Mr. Doney and family went to Cedar Rapids to make their home 13 years ago. While a resident of Guttenberg Mr. Doney was town marshal and street commissioner for a number of years. He is survived by his wife, two daughters, Mrs. M. H. Turner and Mrs. E. J. Boyle, both of Cedar Rapids, five grandchildren; one sister, Mrs. Gertrude Stolz of Cushing, Iowa, and many other relatives and friends. The funeral was held at Cedar Rapids.

Photo is from a 1926 news article from the Cedar Rapids Republican 3/14/1926, titled:
"Alfred Doney Recalls Exciting Experiences in Civil War; Lone Survivor of Guttenberg G.A.R" The image of the article is too blurry & faint to transcribe.

Note: he also used the alias George A. Mason 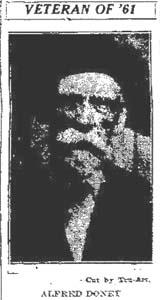