Jonathan Lee was born on July 1, 1961 to Raymond and Janet (Burke) Vangen in Postville, Iowa. He graduated from M-F-L- High School in 1979 and attended Waldorf College and Upper Iowa University. In high school he participated in football, basketball and baseball, including two state baseball tournaments, finishing first in 1976 and third in 1977. Jon worked for the Wisconsin State Prison in the Rec Department for seventeen years.

Jon enjoyed traveling, driving his car, taking trips to Las Vegas, listening to country and classic rock music and attending concerts with his daughter. He constantly worked on his collection of autographed cards, including his favorites, Raef Lafrentz, Steve Stricker, Jack Dittmer and Matt Kenseth. Jon also liked going to Miller Park and Lambeau Field to cheer on the Brewers and Packers. He loved spending time with his family, friends and his yellow lab, Case.

Jon was preceded in death by his grandparents, Johan and Evelyn Vangen and Melvin and Goldie Burke.

Visitation will be Wednesday, October 26, 2016 from 4-7 pm at Leonard-Grau Funeral Home and Cremation Service, Monona, Iowa and one hour before services at the church on Thursday.

Funeral Services will be at 11:00 am on Thursday, October 27, 2016 at St. Paul Lutheran Church, Monona, Iowa with Rev. Erika Kielstrup as the Officiant.

Burial will be at a later date at Walnut Mound Cemetery, Retreat, Wisconsin. 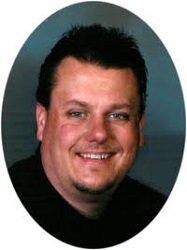