Survivors include a sister, Anita Stade of Garnavillo.

--- Note: Submitter is not related.

SOURCE: THE OUTLOOK, Monona, Iowa newspaper, Wednesday, December 15, 2004, page 6A (the photo of Mrs. Kliefoth was included with the obit)

Cora Kliefoth was born to Max and Bertha (Halberg) Bahls on June 28, 1907 in Garnavillo, Iowa. On February 10, 1927 she was united in marriage with Elmer Kliefoth in Garnavillo. One daughter, Darlene, was born to them. Cora farmed with her husband for a time and then worked at the original turkey plant in Postville, Iowa until her retirement. She loved to fish, garden (especially flowers), play cards, quilt, and tat.

Preceding her death were her parents; her husband Elmer on April 23, 1977; her daughter Darlene Wilker in 1996; her son-in-law Clifford Wilker in 1999 and numerous brothers and sisters. 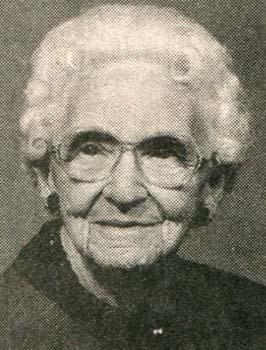