Theodore Sherman, one of Monona's three surviving Civil War veterans, passed away at his home here on Jan. 1st, 1930, at the age of 87 years. Funeral services were held Saturday at the M.E. church with Masonic orders and interment in the city cemetery. He is survived by his widow and one daughter, Blanche, besides many other relatives and a host of friends.
~Clayton County Register, January 9, 1930; Monona column

Theodore Sherman II, one of a family of fourteen children, the son of Fredrick and Minerva Severance Sherman was born in Yorkshire, Cattaraugus County, N.Y., Sept. 16, 1845 and departed this life from his late residence at Monona, Clayton County, Iowa, on January first, 1930 at the age of 84 years, 3 months and 15 days.

Mr. Sherman came west with his parents from New York State about 78 years ago, when but a lad of eight years, and witnessed the growth of Monona from a little village to a thriving town of more than eleven hundred inhabitants.

He organized Monona Post of the G.A.R. and was always active in it. He belonged to the I.O.O.F., was a member and always intensely interested in the Masonic Fraternity, serving as Worshipful Master several times. In May, 1924, he became a Gold Star Mason having rounded out fifty years of Masonic brotherhood. He was also a charter member of Monona Chapter No. 256 O.E.S., President of Clayton County Soldiers Relief Commission and was the chief instrument in the organization of the local Women's Relief Corps.

Mr. Sherman was a loyal patriot serving in the Union army for three and one-half years as a member of Troop L, Sixth Iowa Cavalry. He first saw service in Dakota, and was a member of the first company of white men to traverse the Bad Lands, being engaged in the battles of White Stone Hill, Takkaho, and Band Lands. He was often one of those detailed to carry the U.S. Mail from one fort, to another, through an Indian infested country, with only a half breed Indian as a guide. To be chosen for this work was a mark of recognition for a young soldier in his teens. During the last year of his service he was stationed in Western Iowa, on the present site of Sioux City, where he had charge of government supplies. He was mustered out in 1865, and turned to the peaceful occupation of farming, which he followed for a few years, later coming to Monona, where he became a contractor and builder, until he retired from active life.

In the early days before we had undertakers here, he and his father made caskets in which to bury the dead, and Mr. Sherman often acted as undertaker.

The closing days of his earthly life were full of pain and suffering but through them shone an increasing appreciation for those early teachings about the Master of men and the heavenly Father, taught him by his parents and brought to his door by itinerant preachers and circuit riders who were frequently entertained at his home.

A few days before his departure from this life, those who waited by his bed-side heard him quote word by word, and verse by verse that familiar poem "Asleep in Jesus" without hesitation or a single mistake, and after a little while was heard to whisper "People don't seem to understand Jesus, or love Him as they used to do, do they?"

Mr. Sherman's greatest joy and pride was the fellowship of his family, and because of its attraction for him, he consistently refused many offices with which his fellow townsmen from time to time desired to invest him, although they learned to depend on him for information relative to the early life and history of this community so frequently that he was universally regarded as an authority in such matters.

Funeral services were held at the First Methodist Church, Monona, Iowa, on Saturday afternoon, January 4th, 1930, at 2 o'clock by the Rev. Louis H. Joslin, Pastor of the church. Music by a mixed quartette and a solo, "Face to Face" by Margaret Killen was greatly appreciated by the family. Clayton Lodge No. 70 A.F. & A.M. attended the services in a body, and Brother Ray Douglass, of Postville, gave the Masonic burial service at the grave. Interment was made in the city cemetery, Monona, Iowa. - from the Monona Leader. 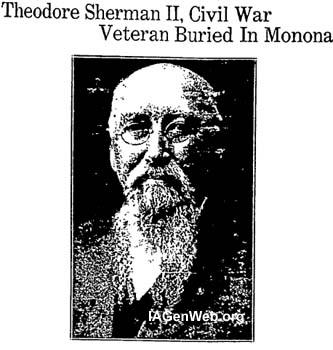