Passed Away Saturday After a Stroke at Age of 89

Grandma Hartwick, pioneer McGregor farm woman, passed away Saturday, April 18, 1936. She had been up and around as usual the day before. She arose Saturday morning and while dressing herself she was seized with a stroke of apoplexy and lingered in an unconscious state until 6 that evening when she breathed her last with the members of her family at her bedside.

Christine Barbara Arnold was born October 20, 1847, in Meissenmeim Province Lahr, Baden, Germany. In November, 1851, her parents and seven other family members left the Fatherland and sailed from Havre, France to New Orleans and then up the Mississippi River.

When they reached St. Louis the river was frozen over and they were obliged to remain in St. Louis until the ice melted. All had paid their fare to Stillwater, Minn.

Through a letter of recommendation from a minister in Germany to a land commissioner in St. Louis the latter influenced the Arnolds to settle in Clayton County, Iowa.

They arrived at the "Landing" (now McGregor) on April 11, 1852. They found the land they had purchased in St. Louis, 12 miles southwest from the "Landing". Neighbors assisted them in building a log house 18x20 which was their home under those primitive conditions.

There were no schools, no churches, no highways and no railroads. The parents were much concerned about the education of their children and used every available means to give them a schooling. A Methodist minister, who befriended them on their arrival, assisted them in many ways and frequently conducted services in their home, of which might be related.

During the time the deceased became deeply interested in religion, and at an early age dedicated her life to God and in united with the Methodist church. She evidenced much interest in the Sunday School, and later served many years as teacher of the primary class in the Giard Sunday School, because she always loved children. She also was deeply interested in missions and was president of the local W.F.M. society for many years.

On March 2, 1865, she was united in marriage to John Hartwick. Their home was blessed with four children. Of these a son died in infancy and their oldest daughter, Mathilda Meyer, preceded her in death 15 months ago. The other children are Mrs. Wessel of Burt, Iowa, and Theodore of this place. Their home was congenial and agreeable, not only for themselves but for all who entered.

Mrs. Hartwick, a prominent pioneer woman of the Giard vicinity for the past 83 years, died at her home Saturday afternoon about 6:00 o'clock, having suffered a stroke early that morning, and never regaining consciousness before her death.

Mrs. Hartwick was born October 20, 1847, in Meisenheim, Baden, Germany, her maiden name being Christina Arnold. On November 1, 1851, she, with her parents, one brother, one sister, and her grandmother left Germany for America, landing at New Orleans. They came on up the Mississippi river as far as St. Louis, waiting there until the river was open for spring traffic. They came north in April, landing at McGregor April 11, 1852, and settled west of McGregor in Farmersburg township in May of that year.

She was married to John Hartwick on March 2, 1865, at the age of 18 years. They moved to the farm six miles west of McGregor which has been her home since. Mr. Hartwick died in 1920.

She is survived by one son, Theodore, on the home place and one daughter, Mrs. J. Wessel, of Burt, Iowa.

Note: burial is in the Giard cemetery 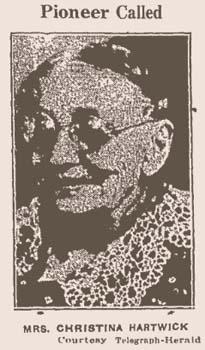