Harold was born August 20, 1915, in Klemme, to Fred and Ella (Glawe) Knoke. The family later moved to Elkader where he spent the rest of his life.

Harold was educated in the Elkader school system. He was confirmed at and was a lifelong member of Peace United Church of Christ in Elkader.

Harold was inducted into the United States Army, serving during WWII, from 1942 to 1946. When he returned home from the service, he went into the plumbing and heating business, where he continued until his retirement.

Harold and Violet Beck were united in marriage on June 26, 1950.

Harold was preceded in death by his parents; his wife on May 4, 1988; two brothers, Kenneth Knoke and Clarence Knoke; three sisters, Lorraine Meyer, Ivanelle Webber and Marion Zittergruen. 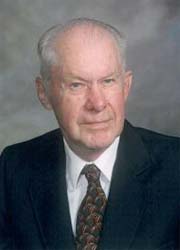