I am not related and have no further information, this is taken from an old scrapbook that belonged to Mrs. Clara (Jones) McCartney

Mrs. Wooldridge was laid to rest in the family lot at Green Hill cemetery.

The following obituary was written by Hon. R. J. Bixby, who knew her for many years.

Mary Ellen Burdine was the daughter of Isaac and Ruth Burdine. The place of her birth was in La Grange county, Indiana. The date of her nativity, was November 28, 1835. When she was six years old, with her parents she moved to the state of Michigan. While still a young girl, the parents felt the urge for travel farther west. So loading their effects into a covered wagon, drawn by horses, a leisurely trip was made across Indiana and Illinois to the state of Iowa. Several years were taken in making the the journey and viewing the country.Their wandering ceased when they reached the small settlement surrounding the Belknap saw mill, on the bank of Bear Creek, three miles northwest of the present town of Edgewood. Mary Ellen was then 15 years of age. The location of the new home was a short distance north of Green Hill cemetery, where amid scenic beauty, is located the awaiting resting place of family membership.

The one of whom we write, embraced all privileges both educational and religious, of the pioneer community. She developed an attractive and useful personality. On the 3rd day of July, 1856, she was married to John A. Wooldridge, a resident of Clayton county. While they engaged in farm work, Mr. Wooldridge was also a good mechanic, a master of the cooper trade. Their home remained in an adjoining neighborhood.

The passing years were drawing closer and closer, the frightful spectre of civil strife. No state was more loyal than Iowa; no vicinity with greater bravery; and no family with more fidelity for the right. When the time came that the father could no longer refuse his country's call to service, there were five children in the home. With courage this good woman overcame timidity, and with help of children food was provided.

While speaking of her country's service, will say that Mrs. Wooldridge has had a unique connection with the wars of our nation. Her father was a veteran in the United States forces in the war of 1812; widow of a Civil War veteran; sister of two men serving in the Civil War, one of whom was killed in service; grandmother of three men who served in the World War; grandmother of two men serving in the peacetime standing army.

In 1885 Mr. and Mrs. Wooldridge discontinued farming and purchased the property in Edgewood, now owned by C. T. Beddow. there they resided for several years. With the renewal of the desire to possess a larger tract of land, or the attraction of a residence near their older daughter, this worthy couple entered a tract of goverment land near Quinn, S.D. They lived there long enough to prove up on their claim. They then returned to Iowa, purchasing a residence in Oelwein. There they made their home for the next 20 years. In 1916 they celebrated the 60th anniversary of their wedding. The following year the earthly life of Mr. Wooldridge was ended. In a short time Mrs. Wooldridge came to Edgewood, where she has since lived, with the exception of a few winters spent with her daughter, Mrs. Ella Brewer in Waterloo. In a prominent location, where she could see the teams, and later the cars, convey her old neighbors along the highway, she maintained her residence.

As age advanced, the homing instinct, akin to human nature as well as to bird life, called loudly for a dwelling place, subject to one's own dictation and direction. The gradual failing of physical powers through the last weeks and months, shifted to other hands and minds, the responsibilities formerly her own. It was then the devotion of her two daughters was fully apparent. No one can question the filial affection and the untiring care, given for years to his mother, by the son, F. I. Wooldridge. Ever since the death of his brother, John, Frank has assumed a responsibility heretofore shared between them. Not that others were unwilling, the distance of residence being prohibitive. There was a rare evidence of a most beauteous affection, flowing to each of her decendants, and from all returning in full measure to her. This is plainly shown by a history of their many family gatherings.

Mrs. Wooldridge's religious character and loyal fellowship, shows a developed unity for and with all followers of the Master which she has faithfully worshipped. Membership has meant more to her as an opportunity for service, than as a chance to defend preconceived opinions. No change has been made with other than the kindest of feelings. She has had membership in the Baptist, United Brethren, Congregational and Methodist churches. The last named continued to be her congenial home, until the flight of her spirit to that land, where neither name nor creed is a surety of admission.

With failing strength and clouded vision, this good woman lingered long on the earthly shore. Finally with tones unheard to others in the room, she was called across the dark stream, to the unknown shore. Faith visualizes a joyous reunion. The unusual length of the life pilgrimage measurers 102 years, five months and 26 days.

Although not one of the original advocates of woman suffrage, when that privilege was accorded her sex, voting became to her a sacred duty. On several of the later occasions, she accepted the "absent voters" privilege. She has voted for president three times. Her wonderfully preserved intellect, and a fund of information, secured from diligent readinf, rendered her more competent, than some of the opposite sex.

To few persons has it been given to witness the long line of changes and improvements, occuring during her life time. She did not resent innovations but accepted the increased efficiency. The automobile carried her more quicky and comfortably than the oxcart if earlier times. The radio has been her cherished possession and a solace and consolation through long hours of waiting.

The centennial celebration of the birth of "Grandma" Wooldridge, a name she was affectionately called, occured on "Thanksgiving Day" of this year. It was indeed a community holiday, supplementing the usual observance of that occasion. the ample, dining rooms of the Methodist church were filled with relatives, former pastors and friends from far and near. There was a most interesting program in which the guest of honor, happily performed a prominent part. Following the festivities, she walked to her rooms in the nearby dwelling.

The flood of cards and friendly greetings, received by this dear person on birthday, Christmas and other occasions, were to her a cherished possession and to donors an honor. Today citizen of Edgewood and vicinity, are all numbered among the mourners.

Infavorable as was the weather, on the afternoon of May 27, a large audience of relatives, friends and old neighbors, gathered at the M. E. church in Edgewood. Funeral services were directed by the pastor, Rev. W. L. Feller. Appropriate numbers were rendered by a male quartet compose of Don Rhines, R. C. Cocking, J. W. Forward and C. J. Rulon, with Miss Forward as a accompanist. The many floral tributes were tastefully arranged. The casket was in charge of Earl, Lysle, Nathan, Evert and Irvin Wooldridge, and Charles Brewer, grandsons of the departed. The resting place is in the family grounds in Green Hill cemetery. The physical being rests in merited peace, while the spiritual entity is with Him who gave it.

The photo was added by S. Ferrall on 10/27/2014. It is from a 96th birthday news article in the Telegraph-Herald and Times-Journal, Dubuque, Iowa, Thursday evening edition, February 4, 1932.
The birthday article didn't give any additional info. that isn't in her obit, so is not transcribed here. 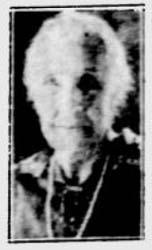