Mr. and Mrs. Paul Brown returned Tuesday afternoon of this week to their home, 642 North Main street, from near Garber, Ia., where they had been since early August, being called there by the serious illness and later death of Mrs. Brown's father, George Richard Francis Borrett, Civil war veteran. Mr. Borrett passed away at his home, near Garber, on Aug 3, 1930, at the age of 89 years. Funeral rites were held in the I.O.O.F. hall at Garber. Interment was made in the Mount Harmony cemetery, near Garber. Mr. and Mrs. Brown remained and visited with numerous relatives and friends in that vicinity and other points in eastern Iowa.

When George Borrett was about 10 years old the family sailed for America and landed in New York, March 15, 1852, after being at sea four and one-half months. Mr. Borrett came to Clayton county with his folks May 10, 1855.

During the Civil war he was a member of Company B, 16th Iowa Vol. Infantry and served until the close of war. He was a member of the Grand Army of the Republic and for many years was very active in the I.O.O.F. lodge.

On July 8, 1866, George Borrett was united in marriage to Amanda R. Kimber. For years the couple lived on their farm near Garber, where they were surrounded by many friends who loved them for their deeds of kindness. They always wanted the others to enjoy themselves. Amanda Borrett died May 24, 1920.

Funeral services were held in the I.O.O.F. hall at Garber and the sermon was ably preached by Rev. A.H. Meyer of Wood, Iowa, who used Psalm 90, verse 10 as a text. Fittingly and becoming to the passing of a Civil War veteran, military honors were done by the American Legion. The pallbearers, dressed in uniform were: Walter Johnson, Albert Webber, Frank Smith, Cecil Hansel, Elmer Morley, Arthr Hubesch. The firing squad was also in uniform.

There was a large gathering of relatives and friends to witness the last sad rites which in a minor way showed in what high esteem George Borrett was held, and how unlimited were his friends. The floral offerings were many and beautiful. All of the children and near relatives attended the funeral. The remains were laid to rest in mount Harmony cemetery.

"Wrap the flag around me, boys,
To die with me more seet
With Freedom's starry emblem, boys
To be my winding sheet."

Anyone having a better photo of Mr. Borrett can email it to the board administrator to replace the very poor photo that was on the microfilm. 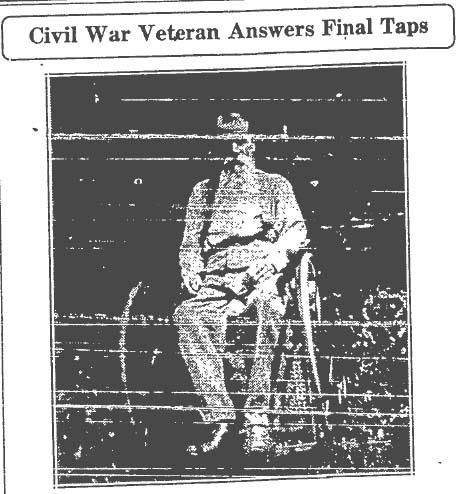