We announced to you through the columns of this paper last week that another of our boys had given the complete and final sacrifice for his government and country that democracies may live and people continue to rule themselves upon earth. In this article the subject is Fred Dunsmoor, Jr., who died in France November 10 from woulds received in action probably on the night of November 7th or early morning of November 8th as his parents received a letter from him which was dated November 7th. He was well and in good spirits when this letter was written but stated that he expected to be called on detail duty at the front even before he would have time to complete the letter.

The telegram from the government announcing his death reached here Wednesday evening December 11, just one day over a month after his death, and his letter under date of November 7th reached here the next morning, December 12. One place in the letter he spoke of not being able to get home by Christmas but hoped to soon after as he thought the war would soon be over. In another place he said he wished he could bring home a souvenir but his pack was so heavy that he didn't feel like carrying anything extra. He also stated that he had been receiving his mail regularly, letters from home and the home paper.

He was called to the colors on April 25, and started his training at Camp Dodge. From Camp Dodge he was transferred to Camp Travis, Texas, and then to Camp Mills, Long Island from where he embarked for overseas service arriving in France the latter part of June, just about two months after the time he entered the service.

He leaves to mourn his loss his father and mother, Mr. and Mrs. Fred Dunsmoor, his grandmother, Mrs. Thos. Dunsmoor and five sisters, Mrs. Martin Gruman of Lamont, Mrs. Frank W. Smith and Mrs. Ernest Dunsmoor of County Corners, Mrs. Howard Berry of Cedar Rapids and Mabel, at present at Grand Rapids, Mich., besides a host of friends and other relatives.

His toils are past, his work is done,
And he is fully blest.
He fought the fight the victory won
And enters into rest.

The honor due this young man can never be paid. He gave all he had and in his death a nation of mourners and ever friend shall weep. 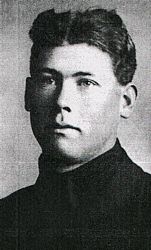