He attended school in Monona. He was an outstanding athlete at MFL, both in football and in track. He was also an accomplished musician, playing contrabass, and was chosen to travel in Europe with the Band of America. He also was a member of the Chancel Choir of St. Paul Lutheran Church and was an active participant in the youth program of his church while he was in high school. He graduated from MFL with the class of 1967. After graduation from high school, he attended the University of Wisconsin, Platteville, for one year and then attended the Area 10 Community College at Cedar Rapids for one year.

Surviving are his parents; one brother-- Sheryl of Monona; and two sisters--Shirley of Chicago and Linda at home; his paternal grandparents, Mr. and Mrs. Louis Zittergruen of Guttenberg, and his maternal grandmother, Mrs. Adele Mueller of Garnavillo; and many aunts, uncles, and cousins. Preceding him in death was one brother, Duane, who passed away on April 9, 1952.

Louis L. Zittergruen's name is on The Wall at Panel 08W Line 026

The following was a newspaper clipping with the date "July 1970" written at the top. The clipping was from the MONONA BILLBOARD. It is not known if the community knew of Louis's death at the time of publication in the newspaper or if Mrs. Ventner had just shared the letter that she had received from Louis. Since it was reprinted with the permission of the Zittergruen family I am assuming that word had been received of his untimely death. The transcriber finds his letter to be poignant and reflects a historical summation of the soldier's perception of the Vietnam War in 1970...... Connie Ellis

LETTER FROM LOUIS ZITTERGRUEN
The following is a letter from Louis Zittergruen from Viet Nam to Mrs. Wayne Ventner, Monona, reprinted with the permission of the Zittergruen family.

Dear JoAnn,
Thank you very much for the letter and the card you sent me. Tell the Patience Circle that I really appreciate them remembering soldiers in Viet Nam.

I have been over here for four months now, and it hasn't been really bad yet. The monsoon rains ended when I first got here, and it still isn't too hot. Our company hasn't seen an awful lot of action, but it still has been too much. The worst things are sleeping on the ground every night, eating C-rations, insects, and being dirty all of the time. We go out in the field for thirty days at a time, and during this time, all of our supplies are brought to us by helicopters. It could be worse, but I get tired of poor food, stale water, and filth. Our only way to get clean is to hop into a stream when we have time. At times this is a couple of weeks apart.

It really is surprising how time flies, and weeks turn into months. It won't be very long until I have a year in and I'm out of the army. I really can't wait, but I will appreciate things more when I'm home.

It really is disgusting to hear that people in the states are against going into Cambodia and bombing North Viet Nam. Most of the infantry either want to fight the war or else forget about it. The way the war is now, we are fighting for nothing. They fight when they want and are only making us spend money. The only way to end this war is to forget politics and turn the army loose. If they don't want to do this, they might as well take us out of this country and forget about it. I would rather go into North Viet Nam and fight than parade around rice paddies here and step on booby traps.

I should close because I have some more letters to write today.

Photo from school yearbook was added by Reid R. Johnson, 2/26/13 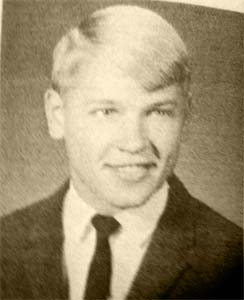