Visitation was held 4-8 p.m. Thursday, September 17, at Leonard-Muller Funeral Home, Strawberry Point, and after 9:30 a.m. Friday at the church.

Robert was born on December 2, 1921, at Delaware, Iowa, the son of George and Hilma (Manson) Yelden. He was baptized at Immanuel Lutheran Church in Delaware and raised in Delaware. Robert graduated from Delhi High School in 1939.

Robert then farmed at Delaware and in the Strawberry Point area, also working for Backbone Country Club. He retired from farming in 1983. Robert worked eleven years in maintenance at the Good Neighbor Home. Robert and Velma lived 22 years in Dundee, Manchester, and in July moved to Strawberry Point.

Robert was a member of St. Johns Lutheran Church in Dundee. He enjoyed his family and gardening.

Robert was preceded in death by his parents and a granddaughter, Ashley Yelden. 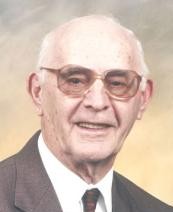