Elkader - Mrs. Louise Leibrock, a pioneer business woman here, died at her home here early yesterday morning following a lingering illness. She was 87. Funeral services will be held Wednesday at 2:00 p.m. from the Freiden's Evangelical Reformed church, with the Rev. Paul Kitterer officiating. She will lie in state at Witt Funeral chapel. Burial will be in East Side cemetery. She was born and raised at Clayton Center and in 1880 she came here to start a millinery store. In 1882 she and her husband, the late Frank Leibrock, organized a Leibrock Ladies Ready to Wear clothing store. She is survived by one daughter, Mrs. Dr. R.L. Morse, Elkader, and two sons, Fred, Milwaukee and Ray, Olin

~Oelwein Daily Register, May 3, 1949
~Photo is from a shorter death notice in the Cedar Rapids Gazette, May 3, 1949
~Note: According to the 1925 Iowa State census
Louise Leibrock was daughter of Fredrick Taake & Sophia Christefor

Mrs. F. G. (Louise) Leibrock, 87, a business woman in Elkader for 50 years before her retirement in 1930, died at 2:30 Monday morning, May 2, at her home here. She had been in failing health for three years, but was not seriously ill until about two months ago. She had been bed-fast since that time.

Mrs. Leibrock had lived in Elkader for 74 years and was a pioneer in the business and social life of the community. She opened a millinery shop on the second floor of the Oehring building when she was 18 years old, in 1880, and operated it until her marriage to Frank G. Leibrock on October 2, 1881. Together they started a ladies ready-to-wear store in the fall of 1881, in the present Eberhart building. Expansion of the business made larger quarters necessary, and in 1891 the business was moved to the Leibrock building. After Mr. Leibrock's death Aug. 10, 1929, she continued the operation of the store until 1930 and then disposed of the business to her daughter, Mrs. Ruby Katschkowsky, who operated it under the name Leibrock's Store until her death Dec. 2, 1943. The business was then sold to Mrs. Phyllis Patterson.

She was a member of the Peace Evangelical and Reformed church in Elkader, and was a charter member of the Order of the Eastern Star for 52 years and served as worthy matron of the local chapter for several years.

As Louise Katherine Taake, the daughter of Mr. and Mrs. Henry Frederick William Taake, she was born Jan. 12, 1862, in Western Kappeln, Germany. She came with her parents to America when she was one and one-half years old and settled with them at Clayton Center. She received her education in the rural schools, and was confirmed in the Lutheran church at Clayton Center. At the age of 13 years she came to Elkader to make her home with her sister, Mrs. E. L. Bosch.

Funeral services were held Wednesday afternoon, May 4, at 1:30 at the home and at 2 o'clock at Peace Evangelical and Reformed church. The Rev. Paul Kitterer officiated. Pall bearers were four grandnephews, Don, Milton, Richard and Douglas Wolf; her nephew, Roy Engelhardt; and a close friend, Harold J. Kriebs, Elkport. Burial was in the East Side cemetery. 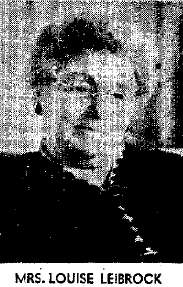