GUTTENBERG, Iowa -- Scott Kristian Nelson, 42, of Guttenberg, died Monday, Jan. 7, 2008, as a result of an automobile accident near Epworth, Iowa.

Services will be at 10:30 a.m. Saturday at St. John's Lutheran Church, Guttenberg, with the Rev. Harold McMillin officiating. Burial will be in the Guttenberg City Cemetery. Friends may call from 4 to 8 p.m. Friday at Tuecke-Allyn Funeral Home & Cremation Service, 207 S. 1st, Guttenberg.

He was born on April 8, 1965, in Prairie Du Chien, Wis., son of Gordon Nelson Sr. and Dian (McFarland) Meskimen. Scott graduated from the Guttenberg High School in 1983.

After high school, he received his pilots certificate, which led to him becoming a Tow Boat Captain for ARTCO. Scott spent 11 months per year on the water, which he truly enjoyed. He spent time on the Ohio, Tennessee and the Mississippi rivers. Scott traveled all over the county, but he had his own little way of letting his family and friends know that he was coming into Guttenberg.

Most recently, he was granted the ultimate gift of love when a nice young girl named Heidi Zittergruen agreed to marry him. They had a wedding date set for May 16, 2009.

He was preceded in death by his father and his paternal and maternal grandparents. 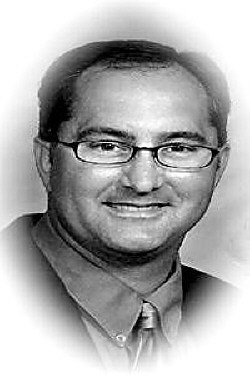