This active and alert couple were married in Jessup, Iowa, near Independence, on November 18, 1868, on which date Mr. Reynolds, en route to the county seat for their wedding license, froze his nose; a picture taken of the couple on this sixty-fifth anniversary shows the "bride" holding a beautiful bouquet of roses which Mr. Reynolds grew on their Arcadia homesite.

Mrs. Reynolds was born in New Haven, Connecticut, on an old homestead which was handed down from an original land grant from England after the Mayflower landing. Mr. Reynolds was born on the Hudson river in Columbia county, New York, near Styverson.

Mr. Reynolds is a Civil War veteran and in 1873 they came to Minnesota where they took up a homestead and in which state he was admitted to the bar. For fifty-one years Mr. Reynolds was a prosecuting attorney, probate judge and later a municipal judge, he rendered much service to his state and did considerable lecturing throughout his fifty-one years of law practice.

Two sons and one daughter were born to the Reynolds, one son now living, C.W. Reynolds of Honolulu. They now have three great-grandchildren, four grand-daughters and one grandson. The grandchildren are all in California. The other son, C.S. Reynolds, was, before his passing on six years ago, a resident of Arcadia.

Nine years ago last September, Mr. and Mrs. Reynolds came to California and purchased the half acre of bare land where they now reside, and during this nine years developed, mostly without outside aid, a flourishing fruit orchard of considerable variety and have created a home amid restful pines on Duarte road, facing the mountains, where a cheer and happy greeting awaits their welcome callers.

Notes: Mrs. Reynolds was Mary May Stoddard, the d/o Rev. Isaac Stoddard who removed from Connecticut to Clayton co. Iowa in 1855. In 1867 she moved with her father to Jesup, IA, where she and Nelson Reynolds were married a year later. 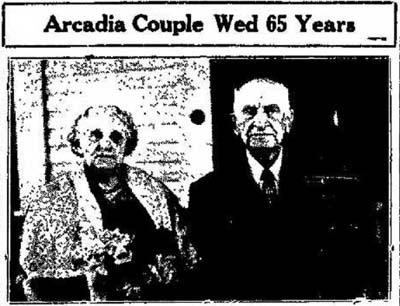