Dec. 17, 1850, was a lucky day for Mr. and Mrs. Fred Harberg of Garnavillo. They were both born on that day, and though 85 years old, they both still enjoy good health. Nov. 16 will be the sixty-fifth anniversary of their wedding day.

Mr. Harberg was born in Mecklenberg. He and his three brothers with their parents, Mr. and Mrs. John Harberg, came to this country in 1854. Although only four years old at the time, Mr. Harberg has vivid memories of that voyage across the Atlantic. Apparently adverse winds prevented the sailing vessel in which they came, from reaching its destination in the scheduled time for food and water became scarce. Mr. Harberg remembers his mother giving some of their bread to hungry children. To the hardships was added grief for the Harberg family. One of the children died and Mr. Harberg recalls how his brother was sewed up in a piece of sailcloth and tossed overboard into a watery grave.

The family finally landed at New Orleans and came up the Mississippi. They made their home on a little farm south of Garnavillo.

Mr. Harberg tells of the difficulties the early German settlers had in getting drinking water. Water was scarce and there were few wells. The English settlers would lock up the wells to prevent their Teutonic cousins from getting water. Finally Dr. Hamilton built a well and dared anyone to lock it up.

Mr. Harberg can tell of many changes in ways of living since the early days of Clayton county. He recalls how when he was 13 years old he worked on a farm for $4.00 a month; how when they made hay, he had to get up early in the morning when the dew was still on the grass so that he could mow it by hand. Later he helped his father in the cabinet making business. About 45 years ago, he went into the wagon making business which he still owns and no matter what the weather, he walks to his shop, five blocks from his home, at least once or twice a day.

Mr. Harberg was born in Bremen, Ohio, and she was brought to Clayton county by her parents. Mr. and Mrs. J. H. Kuenzel, when she was two years old. The Kuenzel family also endured hardships on their trek across the country. Mrs. Harberg says they got stuck in a swamp on the site of Chicago.

Both Mr. and Mrs. Harberg have always been active members of St. Paul's Evangelical Lutheran church. Mrs. Harberg was the church's first organist and continued to be until about 1878 r 1879. Mr. Harberg sang bass in the church choir for more than 60 years. 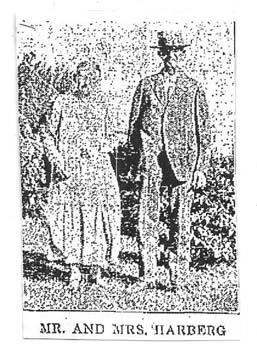