His parents, who were both natives of the State of New York, came to Iowa in 1855 and settled on a farm near Strawberry Point, in Clayton county, where he was reared. He was educated in the public schools and Upper Iowa University, from which institution he graduated in 1875. He attended the Law Department of the State University of Iowa as a member of the class of 1876.

In 1877 he located at Strawberry Point in the practice of law. In 1887 he formed a partnership with his brother, Charles W. Newberry, in the law business, which partnership still exists under the firm name of Newberry Brothers. He has been an officer of the Strawberry Point State Bank since its organization in 1883 and now holds the position of president of said bank.

He was elected Senator from the Thirty-sixth District in 1903 and served in the Thirtieth, Thirty-first and Thirty-second General Assemblies. He was married to Miss Eva M. Buckley on December 30, 1905. A Republican in politics.

Byron W. Newberry
Senator from the thirty-sixth district, was born in Lorain county, Ohio, September 1, 1853. In 1855 with his parents he moved to Strawberry Point, where he has since resided. He was educated in the common schools and at the Upper Iowa University, where he graduated in 1875. He attended the law department of the State University of Iowa, where he graduated in 1876. In 1877 he opened a law office at Strawberry Point, and in 1887 formed a partnership with his brother, Charles W. Newberry. He is also identified with agricultural interests. He served as senator in the thirtieth, thirty-first, thirty-second, thirty-second extra and thirty-seventh session of the general assembly of Iowa. In 1905 he was married to Miss Eva M. Buckley. They have no children. He was re-elected state senator in 1916 and 1920. A republican in politics.

-these bios were transcribed by Sharyl Ferrall (not related to subject) 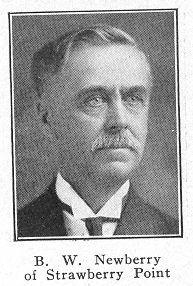