Three years and three months of Mr. Nading's life have been given to Uncle Sam's Navy.

Harold Nading, former Littleport principal in the Central Community school system who is now teaching at Sherman Institute at Riverside, Calif., was recently presented with a prformance award according to the Sherman Bulletin, school newspaper.

The award was in recognition for work done by Nading at the Beclabito day school at Shiprock, New Mexico, an agency of the institute. The award was in the form of a $200 gift.

Nading was honored for developing a plan for utilizing test results to gain a clear picture of academic achievement of pupils and of the schools in which the tests are given. 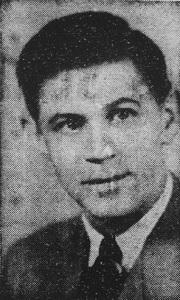