More than 70 years residence in Clayton county is the record of J. C. Flenniken, retired Strawberry Point business man. His father, Wallace W., was the renowned inventor of a turbine wheel bearing his name.

Mr. Flenniken was born at Millville in 1862, and received his education in the Elkader schools. He was employed in the jewelry store at McGregor, and later operated a goldsmithy of his own at Traer, Iowa. In 1884 Mr. Flenniken returned to his native county and located at Strawberry Point.

Chas. Roberts and Mr. Flenniken built a fine business block on Commercial Street, which is an asset to the town.

Mr. Flenniken has been active in public life, and served as state representative from Clayton county for several terms. Both Mr. and Mrs. Flenniken are in good health and able to get around, despite their advanced years. 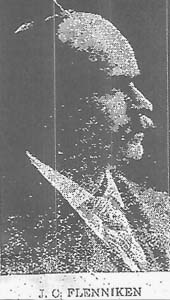