A retail merchant in Elkader for 48 years, W. F. Kleinpell had been in business longer than any other merchant in town. He belongs to that generation of men who were responsible for the growth and development of the community. He has always been an active and progressive merchant willing to pioneer in new fields and to expand his business to keep pace with the times.

Mr. Kleinpell was born in Cassville, Wis., Dec. 10, 1863. When only 14 years old he left home and began to make his own way in the world, going first to Freeport, Ill., where served an apprenticeship of two and one-half years to a machinist. From there he went to Garber for two years and to Cassville, Wis., for three years. In both of these places he engaged in general merchandise business, In 1887, he moved to Elkader where he continued a hardware store for a firm that he afterwards bought out and continued the business with such great success that he soon enlarged it by adding heating and plumbing departments.

Jan. 18, 1888, Mr. Kleinpell married Minnie Schmidt. They had two children, Louise Caroline, who is the wife of Clarence Murphy, and Dorothy Ella. The latter and her mother are both dead.

Mr. Kleinpell has served on the city council and on the school board and is a member of the Woodmen of the World.

W. F. Kleinpell has a biography in the 1916 Clayton county history on the main website (http://iagenweb.org/clayton)

Kleinpell, William F. 1864 - 1943 has a brief obituary posted on the Clayton county obit board. 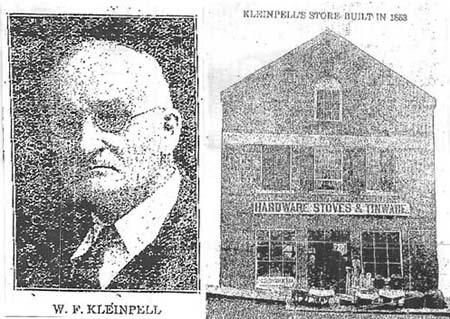