Manchester, Ia - Seventy-six years ago, in 1866, a youth of 16 years left his home at Hanover, Germany, for America, the land of the free, to escape German oppression. He was herding sheep at a yearly remuneration of $7, plus his board. At the age of 18, he would have been forced to give three years to German military training.

Today, this patriarch of nearly 93 years sits at his comfortable home at Wood Center, 14 miles northeast of Manchester, reflecting on the activities of four wars which he has witnessed, and, as he remarked to friends this week, "In view of the present conflict, I am doubly glad I came to the United States. All of the friends I had there were poor, with no chance to build a permanent future, and I have never had any desire to go back."

This man is John Brockmeyer, retired farmer, who will be 93 in December, and is the oldest resident of his community. He is the last member of his immediate family. Small of stature, with eyesight sufficiently good to read, his hearing unimpaired, and of a jovial companionable nature, Mr. Brockmeyer enjoys his radio and newspapers and visits from his children and friends. Until this year he was able to do light chores about the place. A rheumatic condition now compels him to walk about the house with the aid of crutches. His mind is clear, particularly with reference to pioneer activities.

Mr. Brockmeyer achieved a farm the hard way. His aunt, Mrs. Herman Wessel, sent him passage in 1866 for a 12-day steamer trip to New York. He came direct to Colesburg, Ia., with no funds, and hired out as a farm hand for 25 cents a day. As he grew older and became more experienced, his wages increased to $18 or $20 a month.

At the time of his marriage, Feb. 26, 1889, to Miss Maria Hildebrandt at Wood Center, Ia., Mr. Brockmeyer bought a 200-acre farm just north of Wood Center for $16 an acre. The farm at that time was one massive grove, and for years he grubbed those trees and chopped them into cordwood until the farm was cleared. Hundreds of cords of wood were marketed at Manchester by this pioneer, who made the trips overland by team and wagon and sled and sold his cargo on the streets. Maple wood brought $5 per cord and oak $4.

Mr. Brockmeyer's last three-quarters of a century have been lived within a radius of 15 miles, and in his estimation, there is no better community than his. "This is a fine neighborhood - we all help one another," he mused this week. "In the old country we lived mostly on rye bread. My landlord, for whom I worked, was the baker, and loaves of bread weighing 30 to 40 pounds were baked in brick ovens."

Mr. and Mrs. Brockmeyer are the parents of 10 children, and unlike many families whose children are scattered to the four corners of the globe, all of their children live within a radius of a few miles, and are frequent visitors to the home at Wood Center, to which the Brockmeyer's retired 20 years ago from active farming. Their children are: Mrs. Oscar Friedley, Mrs. Ernest Moser, Clarence, Harold, Mrs. Howard Wessel, and Mrs. Lee Totman, all of or near Wood Center; Ben, Strawberry Point; Ernest, near Aurora; Mrs. Dewey Gramlick, Lansing, and Mrs. Irving Wessel, Edgewood. They have 25 grandchildren.

Both have been lifelong members of the Methodist churches at Colesburg and Wood Center, and attended services regularly as long as their health permitted.

His obituary can be found on the Clayton co. IAGenWeb Obituary Board by clicking the link below. The photo appeared with this biography. 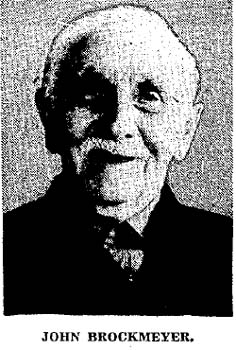