This biography from Portrait and Biographical Record of Dubuque, Jones and Clayton Counties IA pub. 1894, pg 432-433 contains several errors. I have 'corrected' it using information found in my own research. The edited bio corrects his surviving sister's name at the time of the writing, which was my grandmother Fanny C. married to Richard Yeoman.

Augustus Elbridge Axtell. The farm owned and operated by this gentleman consists of two hundred and five acres situated in Cass Township, Clayton County. For more than thirty years he has made his home in Iowa, having come to this state in September, 1863 and settled on his present farm two miles east of Strawberry Point. Through energy and good management he has become the possessor of competence, and is recognized as one of the well-to-do agriculturists of the county.

A native of Massachusetts, our subject was born in Berkshire County, September 29, 1821. He is of English descent, his paternal grandfather having been a native of that country. His father, Daniel Axtell, was born in Massachusetts and in 1823 brought his family west as far as Ohio, settling on the Western Reserve, in Lorain County, near the present site of Oberlin. By trade he was a carpenter and built the first frame house in Oberlin. In his community he was a man of considerable prominence and held a number of local offices, including that of Justice of the Peace. His death occurred in August 1855.

Our subjects mother bore the maiden name of Jane Wellman and was a native of Maine. Her father, Abraham Wellman, was a soldier in the Revolutionary conflict and also took part in the War of 1812. The family, it is supposed, descended from Irish and English ancestry and was identified with th early history of New England. Mrs. Jane Wellman Axtell died about 1873. She had a family of fifteen children, ten sons and five daughters, of whom all but one attained years of manhood and womanhood. The sons, with the exception of A.E. were carpenters by trade. Manley Washington Axtell in later life became a physician and during the Civil War was assistant surgeon of an Illinois regiment. After the close of the Rebellion, he engaged in buiding railroads in the west, in which enterprise he made a fortune; he died in 1893 in Ohio, Manning Jefferson Axtell, was a member of Company E, One Hundred and Twenty-eighth Ohio Infantry, and served for two years; he now lives near Cleveland Ohio, where he owns valuble property. Marcus, also a participant in the war, died in Illinois. Addison, a veteran of the late war, resides at Geneva Ohio. The other brothers are deceased, as are also the sisters with the exception of Fanny C., wife of Richard Yeoman, of Mahaska County Iowa.

The oldest surviving member of the family is the subject of this sketch. He was two years of age when taken by his parents to the frontier of Ohio, and there he grew to manhood. Several of his brothers and sisters were educated at Oberlin College and were teachers. For a time he worked at the trade of a carpenter, which his father and brothers followed, but the occupation did not suit his taste, so he decide to become an agriculturist. With this object in view, in September, 1863, he came to Iowa and settled on the property where he has since resided.

While a resident of Ohio Mr. Axtell married Olive Dulmage, who died April 15, 1858, leaving three children. Maria I., a graduate of Oberlin College, taught school for a time; she is now the wife of Franklin Richardson, a farmer in Cass Township. Rosa B., also a graduate of Oberlin and a former teacher, is now the wife of Rees Davis, a agriculturist. Elbrige K is a farmer in Clayton County. The second marraige of Mr. Axtell also occurred in Ohio, his wife being Martha A Bartlett Axtell, a native of New York State. They have four sons and one daughter living, namely, Elson E., who married Celia Lamphier, and is a farmer in North Dakota; Herman A., who married Leah Lamphier, and is engaged in cultivating his father's farm; Arthur, who chose as his wife Miss Alma Scovell and is also an agriculturist; Harry J., a farmer in North Dakota; and Manie, a well educated young lady, who resides with her parents.

For nine years Mr. Axtell has been Treasurer of the Clayton County Fire Insurance Company of which he is now Vice-President. He is President of the Strawberry Point Creamery, the largest concern of the kind in the state, and in this office he has served efficiently for three terms. For twenty-five years he has been connected with the Grange. In his political views he is a Democrat, always to be relied upon to support the measures adopted by that party. His wife is a member of the Baptist Church, which he attends, although not identified with any denomination. He is a progressive farmer, quick to avail himself of every opportunity for increasing the value of his property, and possesses the force of character that wins and retains friends. 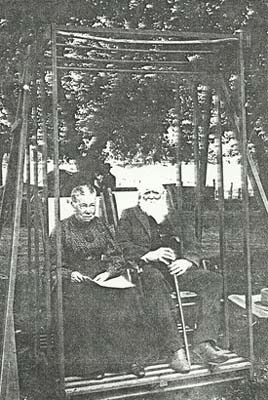