McGregor, Ia., Feb 12  Special:
George Douglas, McGregor, Ia., 88 year-old Civil War veteran, knew Lincoln, and claims the added distinction of descent from the same Vermont family of Douglas, of which Lincolns great rival, Stephen A. Douglas, was a member. His head is bowed with age and infirmity, but it is has known honors, for Abraham Lincoln patted it once upon a time.

It happened at Freeport, Ill., the day of the Lincoln-Douglas debate, as Mr Douglas rlates the incident. His uncle, George D. Sidney, a tanner at Alton, Ill, had been a friend of Abraham Lincoln, for years. When the special train from St. Louis, crowded with cheering Illinois people on their way to Freeport, to hear the debate, stopped at Alton, Mr. Sidney and his nephew were among those who went aboard.

On the station platform at Freeport, Mr. Sidney and Mr. Lincoln met and had a talk. In the course of it, Mr. Lincoln too notice of the nephew and gave him a kindly greeting and a pat on the head.

Mr. Douglas has another reminiscence of Abraham Lincoln. It is of a day several years earlier, when Mr. Lincoln drove into Otter Creek, the Illinois village where the Douglas family lived, and took dinner at their house. He remembers how astonishingly tall Mr. Lincoln was to him as he drove up in his horse and buggy and got out at their gate, and particularly how Mr. Lincoln pulled him out of a mud puddle, into which he had fallen ignominiously. In a scuffle with another small boy. 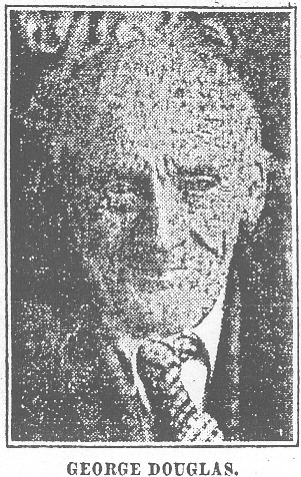