LINCOLN ONCE PATTED HIS HEAD

McGREGOR, IA., Oct. 14  Special:
If he hadnt run away from home George Doulgass could not now say See this bald head of mine. Abraham Lincoln once patted it.

Mr. Douglass is the aged janitor of the Congregational church of McGregor. It is about as good a job as he ever held except when he was a soldier and fought valiantly for the union from 1863 to 1865. He has always been short of this worlds goods, yet real riches are his, after all, for Lincolns hand has touched him.

Mr. Douglass was born in Clayton, IA., of one of the pioneer families of northeastern Iowa. When 16 years old he had an idea he wasnt being treated right at home and ran away.

For some months, he says, I worked as cabin boy on a Mississippi river steamer, then I went to Alton, Ill., where I had an uncle. My uncle was a wholesale leather dealer. Lincoln had tried a lawsuit for him and they had become friends. When the Lincoln and Douglass debate was set for Freeport, Ill., uncle decided to go. I begged him to take me along, but he wouldnt. I waited until he had left the house, then I sneaked out, went down to the depot and got onto the train in the car behind. When the conductor asked for my fare, I told him my uncle was in the next coach and would pay it, which he did.
After we had reached Freeport and were walking down the street I heard someone say Hello, George Uncle turned and said to a tall man who was holding out his hand. Why, hello Able! The two talked together a minute then Lincoln looked at me and said to uncle, This is your boy, is it?

No, uncle answered. Hes my nephew and he ran away from home. Lincoln put his hand on my head and said, You look like a pretty good boy, but you shouldnt have run away from home. That was wrong!

Several times after that during the day Mr. Douglass says his uncle and Lincoln were together. Just before the meeting Lincoln sent the uncle on a political errand and during his absence took charge of his runaway nephew. He had him given a seat on the platform and there, says Mr. Douglass, within a few feet of Lincoln, I sat all evening and heard the great debate. 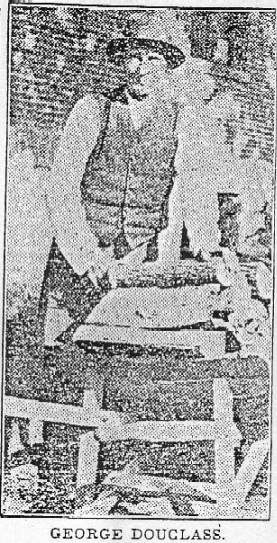