William C. Nieman, now living retired at Earlville, has passed the seventy-seventh milestone on life's journey. He is a native of the kingdom of Prussia, Germany, born June 27, 1837, and his parents were William and Mary Ann (Meyer) Nieman. The father brought his family to the United States in 1845, sailing for New Orleans, where he arrived after a voyage of nine weeks and four days. From the Crescent city he made his way northward to Ohio and for a brief period lived in Cincinnati. In 1847 he removed to Clayton county, Iowa, and there reared his family, which numbered five children: Henry; William C.; Caroline, deceased; Elizabeth; and Mary, who has also passed away.

William C. Nieman was but eight years of age when the family bade adieu to the fatherland and sailed for the new world. He was largely reared in Clayton county, where he remained until the 5th of February, 1874, when he came to Delaware county, settling in Elk township, it was subsequent to this time that his father passed away, dying in 1878. The mother, however, had been called to her final rest in 1860 and both were interred in the Guttenberg cemetery.

Before coming to Delaware county, or in 1868, William C. Nieman purchased ninety acres of land for a little more than thirty dollars per acre and four years later he traded this tract to its former owner. E. H. Cummings, for an entire quarter section. He left that place in 1883 and took up his abode in Delhi township, where he invested in property, to which he added from time to time as his financial resources increased until he was the owner of five hundred and ninety three acres of rich and valuable land in Delhi township. Year after year he carefully tilled his fields and carried on the work of the farm, making his home thereon until 1901, when he retired from active business life and removed to Earlville. He has led a busy and useful life, and sound judgment guided him in all of his business affairs, enabling him to overcome all difficulties and obstacles in his path and work his way steadily upward to success.

On the 19th of November, 1863, Mr. Nieman was united in marriage to Miss Mary Ann Brandhorst, a daughter of Caspar and Mary Brandhorst, and they became the parents of eleven children: Amelia, now the wife of Henry Young, of Dubuque; Joseph C., who is living in Manchester; George W., a well known horse dealer; August, a resident of Delhi township; Ida, the wife of William Kraegenbrink, a resident of the same township; John B., living in Delhi town­ship; Clara, the wife of Rudolph Hahn; Martin P., whose home is near Earlville; Augusta, the wife of Henry Yelden; Henrietta, the wife of Martin Maurer; and Emma, living at home, the widow of John Yelden, who died on the 8th of May, 1914.

Mr. Nieman is now independent in polities, voting for men and measures rather than party. He has filled a number of local offices, serving as road supervisor for ten or twelve years and as school director for a number of years. The cause of education finds in him a stalwart champion and he has ever been helpfully interested in public affairs. His has been a long, active and useful life, lie has never been afraid of hard work and it has been his energy and determination that have brought him a comfortable competence. He started to work in the timber and, like Lincoln, was a rail splitter. When fifteen years of age he drove five yoke of oxen to the plows. In politics in early life he was a stalwart republican and helped to elect Lincoln, advocating his cause as a campaign speaker. Not infrequently he would take his stand upon the threshing machine and addressed the pioneer settlers around him in support of the martyred president. He has lived to witness many notable changes not only in his home locality but throughout the country, and his influence has always been on the side of progress, right, reform and improvement. 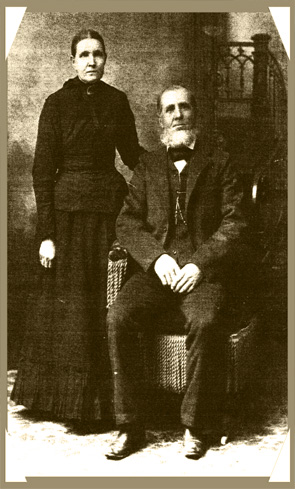