"You have to figure, ancient history to our generation is Desert Storm," said Jack Caputo, 69, of Forest City, a former Air Force fighter pilot who is retiring after many years as director of veterans affairs in Winnebago County.

"I don't know what they teach in history classes these days," said Chuck Harris, 83, who served in Korea. "I've seen man-on-the-street interviews on TV shows where people didn't know what Pearl Harbor was. And that's a shame," he said.

"He represents the sacrifice of that generation," said Harris. "You really have to be in the service to know what sacrifice is. And Harlan lost a brother at Pearl Harbor."

Harris, who served in the Marines, said he was in Korea for 11 months and saw firsthand the horrors of war. "After Pearl Harbor, some of those guys were in for three or four years," he said.

He said flags will fly at half-staff in Central Park and at the VFW post Saturday. "It's our way of remembering," said Harris.

Caputo was coordinator of Honor Flights in North Iowa, a program in which World War II veterans and others were flown to Washington, D.C., for a day of sight-seeing the various war memorials and other landmarks.

"Pearl Harbor was the start of the sacrifices of our servicemen in World War II," said Caputo, who served in the Air Force for 28 years. "We owe a lot to them. Today, we don't speak German and we don't speak Japanese and it's because of them."

He said he had four uncles who served in World War II. He can remember as a child, sitting and listening to the men tell their war stories  "but never in front of their spouses," he said. "They didn't like to talk about it except among themselves."

Caputo said recently he learned of a man standing in line at the check-out counter of a grocery store who was wearing an Honor Flight cap. "As he was about to pay, the man behind him in line said, 'Let me take care of that for you. I can do what I do because of what you did.'

"That's the kind of message I think of when I think of Pearl Harbor and all that followed it," said Caputo. 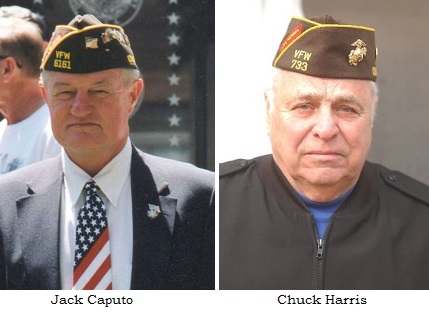