DOUGHERTY -- A North Iowa Korean veteran says hed fight for his country in a heartbeat.
Id do it all over again, said Edwin Waszak.

Waszak was one of five American Legion members honored for longstanding membership during Memorial Day services Monday evening in Dougherty.

Born and raised in Cicero, Illinois, near Chicago, Waszak hails from a military family. His fathers World War I heroics earned him a French medal and his brother served in World War II.

Back home, everyone was in the service then, he said.

Waszak, who served in the Armys infantry division, was sent to Korea at age 19. While there, he was injured when shrapnel entered his lower spine.

Memorial Day is a somber occasion for him, having known and served with so many who didnt make it back home.

This time of year always gets to me after I saw what happened there, he said. My whole outfit was gone.

Waszak moved to Dougherty five years ago to be closer to his family. Hes found it to be a good fit.

A member of the 753rd Tank Battalion, Ambrose Rooney served under Gen. George Patton in World War II. He was on the front line for 487 days and is a Purple Heart recipient, according to daughter Karen Rooney. Rooney spoke on behalf of her 95-year-old father, who was born and raised in Dougherty. He currently resides at Good Shepherd in Mason City.

He was well-known for his Catholic faith on the battlefield. 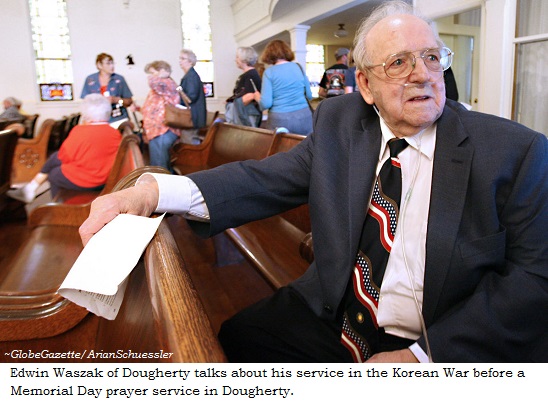