MASON CITY  Mason Citys American Legion is seeking new members, particularly those who are active duty or have served in the Gulf War, Iraq and Afghanistan.

The Clausen-Worden Post 101 has 141 members, Adjutant Larry Montgomery said, mainly those who fought in World War II, Korea and Vietnam.

The post  which is named after two young soldiers from Mason City  is hoping to preserve its history as it loses long-term members, Montgomery said. Its one of 593 across Iowa, of which nearly all carry the name of soldiers, sailors, Marines and airmen killed while in service of their country.

Army Pfc. Robert Clausen, 19, and Pvt. Clifford Jimmie Worden, 23, entered the Army in June 1917, during World War I, according to information compiled by Montgomery. They were first attached to the 2nd Iowa Infantry before transfer to the 168th Infantry, known as the celebrated Rainbow Division. Their company was engaged in battle on March 5, 1918, when an enemy artillery shell struck and killed both of them. Clausen and Worden were laid to rest in a U.S. military cemetery in Meurthe-et-Moselle, France.

With the help of the Red Cross and the U.S. War Department, Wordens family was able to bring his body back to Mason City on Sept. 24, 1921.

The veterans of Clausen-Worden Post 101, which was established in April 1919 as a congressional-chartered patriotic veterans organization devoted to mutual helpfulness, prepared a heros welcome for the flag-draped casket on display at the armory for military services.

Wordens legacy was an act of intensifying patriotism that has swept over North Iowa, Legion Chaplain A.W. Tandy told the crowd gathered at the service. Tandy said the death of those two young men drives home to North Iowa that war was at hand and many others had paid the extreme sacrifice.

Montgomery has preserved records on Clausen and Worden to ensure their memories will be passed on to future Mason City Legionnaires. He hopes by doing so, a strong sense of patriotism will continue  something he feels has waned over the years as the country becomes more detached from major events like World War II.

The American Legion says it is the nations largest wartime veterans service organization and is committed to mentoring youth and sponsoring community programs, advocating patriotism and honor, promoting national security and continued devotion to service members and veterans. 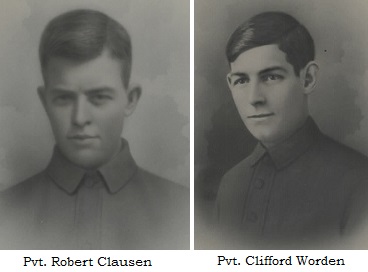