MASON CITY  Mercy Medical Center-North Iowa was founded 100 years ago after an order of nuns responded to a request from Mason City residents and the medical community for a large, modern hospital. The hospital has grown tremendously over the past century, but one thing has remained the same, according to CEO Dan Varnum.

We continue to be a faith-based organization, he said. We are honored to carry on the legacy of the Sisters of Mercy.

In 1913 Mason City Mayor Truman Addison Potter traveled to the mother house for the Sisters of Mercy in Dubuque, an order devoted to caring for the sick, to make the request for a hospital in his community.

Members of the order go wherever there are needs to be met, said Sister Corita Heid, who served as CEO at Mercy in Mason City from 1977 to 1981.

By 1913 the Sisters of Mercy had already established hospitals in Dubuque, Waverly, Fort Dodge and Cresco. They responded to the call from Mason City and agreed to establish a hospital here as well.

Today the hospital operates two campuses in Mason City and employs 2,600 people across its network, which includes hospitals and health centers in Algona, Britt, Cresco, Emmetsburg, Hampton, Iowa Falls, New Hampton and Osage, as well as many clinics throughout North Iowa.

The emergency room at the Mercy East Campus in Mason City, which had just two rooms in 1916, now has 19 rooms. More than 30,000 people a year are treated in the ER.

The changes in health care over the years, including a startling number of new regulations, always create new challenges for us, Varnum said. But with the changes come new opportunities as well.

Today the emphasis in health care is on prevention, according to Varnum. He said Mercy now has 30 health coaches who work with people to help keep them out of the hospital.

Varnum, who has been the CEO at Mercy since September 2012, said the biggest challenge during his time at the hospital was the death of three colleagues in the Mercy Air Med helicopter crash near Ventura on Jan. 2, 2013.

The crash was just devastating to the entire Mercy family, he said.

Varnum said one exciting thing about Mercy people dont know about is the graduate medical education the hospital does.

Being an educational facility keeps us on the leading edge, he said.

We are training doctors as well as practicing medicine, Varnum said.

Medical students from Des Moines University and the University of Iowa frequently are in the hallways at Mercy.

Heid said the educational programs take a huge commitment on the part of the Mercy physicians who provide the training.

Heid was the last Sister of Mercy to serve as CEO at the Mason City hospital. After that she served on the hospitals board of directors, and is now on the regional board for Iowa Mercy hospitals.

She said employees are trained to follow the legacy of the Sisters of Mercy so their spirit will continue.

Varnum noted the Mason City market ranks 24th out of 306 health markets in the United States, according to the Commonwealth Fund, which does scorecards for health care performance.

We are so blessed in a community of 28,000 people to have a health care organization with this size and stature and breadth of medical specialties and capabilities, he said.

Mercy Medical Center-North Iowa is having a 100th anniversary celebration on Sept. 16.

The event will include an open house dessert reception and historical displays from 2 to 4 p.m. in the East Campus Auditorium at 100 Fourth St. S.W.

More information and photographs at webpage, link below. 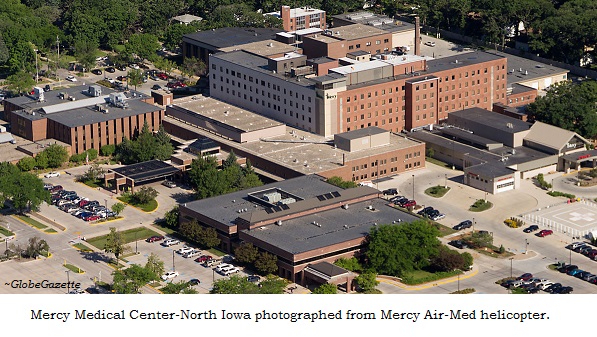