Veterans 'still are fighting a war for you,' says Clear Lake grad

CLEAR LAKE  Most Veterans Day speeches focus on what rights and privileges the country has because of the sacrifices of those who have served in the nations armed forces.

Clear Lake graduate Army Spec. Brody Moran shared a different view with students Friday at E.B. Stillman Auditorium at Clear Lake Middle School. He told them about what they have the liberty to live without: the physical and emotional impact of war.

You talk to other veterans, they still hear the car door slam  they still think theyre getting mortared, said Moran, a 2011 Clear Lake graduate. They see pieces of tinfoil in the road, they think its an IED.

That thats the true liberty you guys have  of not having to experience this.

Moran served as an Army signal analyst for military intelligence in Afghanistan. He also served in Germany. He said he still deals with nightmares and other psychological effects of serving in Afghanistan. He views post traumatic stress disorder, or PTSD, similarly to depression in that its something most people go through.

Moran says he was told to seek help if PTSD lasted longer than two months. He was immediately jittery around loud noises and always watchful. After a week and a half he started having the same nightmare over and over every time he fell asleep.

He drank Red Bull and Monster, two highly caffeinated drinks, to stay awake. Pinched himself if he felt drowsy. Anything to avoid falling asleep and having that dream. Anxiety and exhaustion led to a very dark place, he said.

Thankfully, I had good friends that were there for me, and if it wasnt for them I might not be here, he said.

The nightmare still returns, but not as often. Moran thinks it might never go away. He also believes hes not the only veteran carrying that burden.

Thats whats really important, is you understand what all veterans have done for you, he told the students. Theyve gone to war, theyve fought a war and they probably still are fighting a war for you.

VFW participants in a Veterand Day ceremony at Clear Lake Middle School on Friday
began outside with rifle volleys, lowering of the flag and taps. 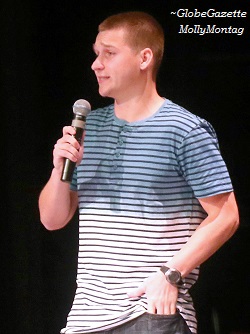