Hopefully, day not done for taps
by Deb Nicklay

CLEAR LAKE  For 150 years, taps has been played as a call to rest.

From the lake, from the hills, from the sky;
All is well, safely rest, God is nigh.

But on its anniversary, taps is in danger of its own day being done.

Fewer and fewer musicians are available to play the 24-note piece during the most sacred of duties: at veterans funerals, said Dr. John Aslakson of Clear Lake.

Aslakson, who has lived in several communities and now is retired and living in Clear Lake with his wife, Mary Ann, is the bugler for veterans funerals representing Veterans of Foreign Wars Post 4868 in Clear Lake.

He is a retired member of the U.S. Coast Guard and has been an active member of several drum and bugle corps.

The presence of a bugler at a veterans funeral is about honor, he said.

However, finding a bugler is not always easy in many areas, he said.

In 2000, there was legislation passed that allowed deceased veterans to have two military personnel fold the flag ... and have a recorded CD or digital bugle play taps at funerals, he said.

All veterans, who sacrificed so much, deserve to have live taps played, with a live bugler at their funerals, he said.

It is not a belief held only by mature musicians.

Its not just about the presence of music at a funeral, agreed 18-year-old Brady Edwards of Mason City.

Edwards, who will graduate this year from Mason City High School, has played taps for two years at Mason City Memorial Day services.

I think playing taps is a remembrance not just for the veteran being buried, but for everyone who made sacrifices for their country, he said.

Edwards wants to enter the military at some point in the next few years. He was influenced heavily by family and friends who have served. His grandfather, Robert Brady of Sheffield, served with the U.S. Army in Korea.

I see his medals and think of what he did, he said. He makes me proud.

He also knew the late Josh Knowles, the 1133rd Transportation Co. National Guardsman who lost his life in Iraq in 2003. Honoring veterans means honoring a friend, he said.

Those who played in the military may feel that if they have not played in recent years they cannot provide the service. Some simply dont know of the need. However, there are organizations working to keep taps alive. Bugles Across America helps publicize the need for buglers and provides buglers to veterans funerals. It has rosters of buglers for every state, Aslakson said.

The organization was part of a special 150th commemoration of taps at Arlington Cemetery on May 19. Buglers Across America enlisted nearly 200 volunteer buglers and trumpeters to play the famous call.

Taps is regularly played at wreath-layings, special holiday commemorations such as Memorial Day, and, of course, at veterans funerals. 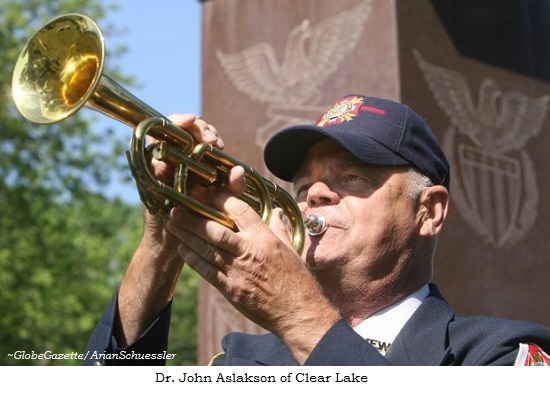