They Served With Honor: Clear Lake Korean War vet would 'absolutely' do it all again

CLEAR LAKE  Keith Reason of Clear Lake had never seen a ship until he enlisted in the Navy in 1950 and saw the vessel he had been assigned to, the USS Princeton.

"That was the biggest thing I had ever seen in my life," said Reason, 85.

The attack carrier, which was headed to the waters off the coast of Korea, had a crew of 3,200. It carried 125 aircraft, including Navy fighter planes, a light bomber and a Panther jet.

Reason grew up in the town of Lenox in southern Iowa. He enlisted in the Navy in March 1950, two months before he graduated from high school. A few days after graduation he was on his way to San Diego for training.

All leaves were cancelled, so Reason did not have a chance to go home before being shipped out.

Reason was assigned to the boiler room on the USS Princeton. Each crew member would work a four-hour shift and get four hours off before going back on duty for another four-hour shift.

The ship had four boiler rooms that provide the steam that powered the vessel.

"It was very hot," Reason said, but the work had to be done.

The USS Princeton, which had been commissioned in late 1945 and had been decommissioned in 1949, had to be "taken out of mothballs" before its new crew could go onboard, Reason said.

The ship reached the waters off the Korean coast in early December.

Reason said the pilots aboard the ship included Lt. Guy Bordelon, who was designated a flying ace after downing five enemy aircraft. About 70 percent of the crew on the ship was 18 to 20 years old.

The captain "used to speak to us as his kids, and we were," Reason said.

Reason said one of the most challenging parts of being on the ship was "you worried all the time." However, everyone knew they still had to do their job, he said.

The USS Princeton headed back to the United States after 13 months. Reason then transferred to the USS Oriskany.

The ship was short of personnel in the division he was in, and the Navy was asking for volunteers. Reason said he decided to sign up because he was young and unmarried.

Reason went aboard the USS Oriskany in January 1953 and returned to Korea. The ship was there until August of that year.

When the ship returned to the U.S., Reason was assigned to a Navy pier in Washington state until being discharged form the service in 1954.

A friend encouraged him to go to college. Reason said he thought he wasn't "college material," but ultimately decided to enroll at Northeast Missouri State Teacher's College. After receiving his degree in 1958, he started teaching physics and industrial arts in the Sidney area in southwest Iowa. He stayed there for five years. He received his master's degree in botany and taught at Northwood for one year before going to Clear Lake, where he taught high school biology and physics until he retired in 1993.

He and his wife, Janice, have been married nearly 58 years. They have two children and five grandchildren.

When asked if he would serve in the Korean War if he had to do it all over again, Reason said, "Absolutely." 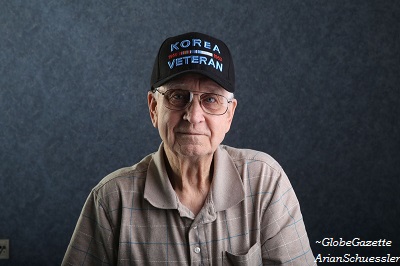