MASON CITY - Roger Paulson of Mason City witnessed the detonation of a nuclear bomb during the Korean War-era. It was a top secret test and he was forbidden to talk about it.

Paulson joined the Navy at age 19.

It was the thing to do then, Paulson said.

He was not stationed in Korea during his military service with the Navy in 1951-52, instead serving aboard the USS Curtiss.

You had your gun duty and we kept it clean, Paulson said. It takes a lot to sweep that stupid thing clean.

The Curtiss was launched and commissioned in 1940. The ship was at Pearl Harbor on Dec. 7, 1941, when the Japanese attacked. It was damaged but was repaired and remained in use throughout World War II and into the Korean War.

I was a seaman, Paulson said. She was a seaplane tender but after the war they converted her to atomic energy.

The Curtiss was altered in 1951 to be used as a base for Operation Greenhouse and atomic tests.

On board there were all the scientists, Paulson said. We put the bomb... on the back of the ship and the scientists worked on it.

Paulson said that certain scientists would work on one portion of the bomb, then they would leave. Another crew would come in for another portion and so on. That way nobody knew the whole thing, Paulson said.

The Curtiss was the most secret ship in the Navy, he said.

Paulson was on board for one such atomic test in the Marshall Islands.

On Nov. 1, 1952, the Curtiss delivered and witnessed the first test of the thermonuclear device, named Ivy Mike. It was early in the morning when it detonated, Paulson said.

They took us to quarters, we faced away from the blast, Paulson said. They said, fold both your arms, put your head in it and close your eyes.

Though the ship was sitting in the ocean, 39 miles away from the blast, Paulson said the light was blinding.

And with the first blast you could see your bones in your arm, thats how bright it was, Paulson said.

The island Elugelab in Enewetak Atoll was completely destroyed and is now a large crater.

That mile-long island was gone when we came back, Paulson said.

The Curtiss was decommissioned in 1957, long after Paulson left the military.

She only had 17 years of service when Eisenhower stopped the testing, Paulson said.

He came back to North Iowa and married.

Now, Paulson suffers from hearing loss he attributes to the nuclear testing.

Doctors say it was the radiation that did it but they (Navy) said we werent exposed to much, Paulson said. Who are you going to believe? You couldnt say nothing for 50 years. 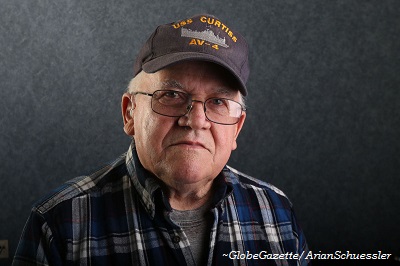