They Served With Honor: Dougherty vet 'never sorry' for service in Korea

MASON CITY - Joe Rooney said serving in the Korean War was "a real eye-opener" for a farm boy from Dougherty.

Little kids were running around with hardly any clothes on, and they didn't know where their parents were during the chaos that ensued after North Korea invaded South Korea in 1950, according to Rooney, 87, who now lives at The Willows in Mason City.

"I've never been sorry I was there," Rooney said. "I saw what we did for those people."

In 1995 he visited the Korean War Memorial in Washington, D.C. Two young boys from South Korea came up to him and asked him if he served in the war.

When he told them he had, the boys asked if they could shake his hand.

Rooney graduated from St. Patricks High School in Dougherty in 1947. He got his draft notice in 1950 and entered the Army in 1951.

He was sent to Korea with the 17th Field Artillery. He was there for a year.

Rooney's unit was located about 60 miles north of Seoul. When he first arrived, the fighting was heavy and they moved every other day to support different divisions on the front lines.

Rooney started out as company clerk, but he didn't like it. His sergeant noticed he wasnt happy, so he arranged for Rooney to be a driver. He drove a truck for six months and then got into the motor pool.

Rooney said the worst part was "the conditions we were living under."

It rained for 30 straight days when I got there," he said. "We never had a dry stretch, period.

The unit didn't have cots to sleep on for four or five months. They slept on the ground and it if was raining, you just sat up," Rooney said.

He pulled guard duty at night. From the hill where they were, you could see the fighting going on," he said.

Guard duty shifts were three hours long. If you woke up at 11:30 p.m. for your shift, if you got back in bed by 3:30 a.m. you were lucky," Rooney said. It was cold during the winter and they could only have heat in their tents until 8 p.m.

They used diesel fuel in a homemade heater.

All the rats were running around our feet," Rooney said.

It was hot in the summer. The mosquitoes were so big that "two of them could carry you off, he said.

They werent supposed to smoke, but they would light cigarettes so the smoke would come near their faces and keep the mosquitoes away, according to Rooney.

Everyone in the unit carried M-1 carbines with 75 rounds in them.

You had to carry that everywhere, even to eat, Rooney said.

When he came back from Korea he farmed in the Dougherty area. He and his wife, Lavon, were married in 1953. She died a year and a half ago.

I didnt deserve her, he said.

Representatives from the South Korean government toured Iowa in 2001. Rooney went to their program in Marshalltown.

A Korean dance troupe performed. All the Korean War vets who attended were given medallions.

Rooney said it is amazing how South Korea has recovered from all the bombing by North Korea during the war.

He said when he was there people were still using oxen to farm, but now they are a modern nation.

They are such thankful people, hard-working people, he said. 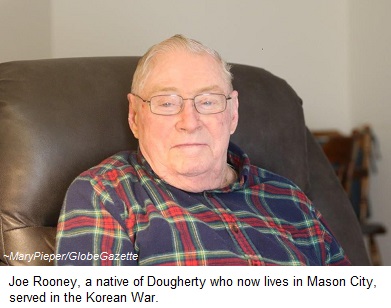