After a valiant and optimistic effort dealing with numerous health issues during her lifetime, Elaine E. Kennedy, 89, Omaha, Nebraska, formerly of Storm Lake, passed peacefully on Sunday, July 21, 2019, after a brief hospice at home.

Mrs. Kennedy, formerly Elaine Olberding, was born at home on a farm with a midwife on October 1, 1929, at Arcadia, Iowa, to Frank and Victoria (Dora Nees) Olberding. She attended country school in Carroll County by riding two miles each day in a horse drawn buggy driven by her older brother. In 1939, after two years, her family moved to a farm near Odebolt, and she attended St. Martins Grade School where she received her first Holy Communion and confirmation. At age 16, she enjoyed spending a year helping her Dad on the farm. In 1946, she graduated from Odebolt High School. Next, she attended and graduated from National Business Training College in Sioux City, Iowa, where she was elected vice president of the Alpha Iota Sorority. After working as a secretary and bookkeeper at the Livestock Exchange building in Sioux City, she married Joe Kennedy on May 9, 1949, at The Cathedral of the Epiphany in Sioux City. A member of St. Marys Guild, she, also, taught CCD classes, volunteered for Meals on Wheels, and became a Brownie and Girl Scout leader, a softball coach, for several years a Shaklee distributor, and a bookkeeper for the family business after Hygrade closed.

Memorials can be made to Diabetic Association or Lied Kidney Transplant Center in Omaha, Nebraska. 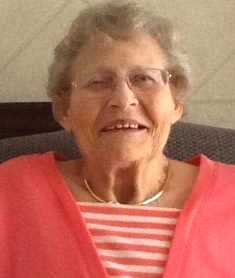