Dolores graduated from Independence High School. She worked as a clerk for the Independence Court House. She was Vice President of Mobil Oil Distribution and Chemsol Chemical.

She was preceded in death by her parents; a brother, Duane Bass and a daughter, Lynn in infancy.

Services will be Friday, March 20 at 11:00 a.m. at St. Timothy Lutheran Church in Hudson with burial in Wilson Cemetery, Independence. Public visitation will be from 4-8 p.m. Thursday at Hagarty-Waychoff-Grarup Funeral Service on West Ridgeway, Waterloo and also one hour preceding services at the church on Friday.

Memorials may be made to Hospice Compassus. 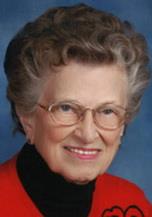