When Mr. Hawkins was eleven years old, his parents moved to Postville, Iowa, and through all his life, except the time spent in service in the Civil War and a few years in Fayette, Iowa, Postville has been his home.

In July 1861, Mr. Hawkins enlisted in the 12th Iowa Infantry, but as he was under age, he was discharged at his father's request. Soon after, however, he enlisted in the 27th Iowa Infantry and served with his regiment until he was mustered out at Baton Rouge, La., June 7th, 1865. He was in every battle in which his regiment engaged and under General Sherman and General A. J. Smith marched more than 3000 miles and traveled by steamboat and railroad more than 10,000. The passing of Mr. Hawkins leaves but one veteran of the Civil War in our community, Mr. D. E. Harrington.

The wife and mother of these children died October 30th, 1897.

On October 10th, 1900 Mr. Hawkins was united in marriage to Mrs. Flavia Evert who survives to mourn his departure.

Mr. Hawkins is also survived by his two step sons Roy and Herman Evert, both of Mason City, Iowa and by his sister, Mrs. Robert Topliff of Glendale, Calif., and by a brother, Harvey Hawkins of Los Angeles, Calif.

It was Mr. Hawkins request that the following lines be read at his funeral service:

He is at rest; his once proud form
At last has had to yield
To death's keen blade that he defied
On many a battle field;
His martial tread is heard no more,
His weary march is done,
He sleeps beneath the flag he loved --
The man of sixty-one.

The flag hangs union down today,
His comrades bow the heads,
As tattoo sounds the last farewell,
The requiem of the dead.
He's fought his fight -- his day is past,
And death at last has won
Another hero from the ranks
Of those of sixty-one.

His comrades form in line once more,
And march with solemn tread,
With wailing fife and muffled drum,
To the city of the dead.
Fire one last volley o'er his grave,
Fire one last sunset gun;
Sound taps -- lights out -- there's one more gone
Of those of sixty-one.

The foregoing is in brief the life history of a man who was known to us all as honest and upright in his every dealing with his fellowmen, a good citizen, neighbor and friend, a kind husband and father and a true patriot, whose memory we revere and whose passing we mourn.

The funeral was held last Friday afternoon at one o'clock from the Postville Community church, Rev. R. F. Galloway conducting the service. Members of the American Legion officiated as pall bearers and the body was laid to rest in Postville cemetery, where taps were sounded to mark the passing of another honored member of that rapidly vanishing order, the Grand Army of the Republic.

Photo of Hiram Parker Hawkins was added by Connie Ellis on February 6, 2012 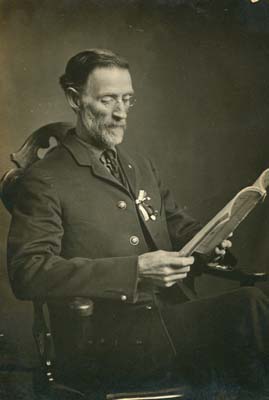