After a lingering illness of the past few months, the Angel of Death came to the tired spirit of Mrs. Karen Hansen, early Sunday morning, Feb. 9th, about 1:00 o'clock, at the Sever Johnson home where she has resided for many years.

Karen Martha Holen was born in Norway, May 10, 1842, a daughter of Mr. and Mrs. Knute Holen, and one, of six children. She received most of her education at home and at the age of 22, in 1864, came to this country to visit an uncle near Eolon.

In the same year she was married to Andrew Hanson* by Rev. Jorth at the West Paint Creek church, and Allamakee county has since been her home. They were the parents of nine children, five having preceded her in death. Her husband passed away about 40 years ago, and left to mourn her passing are Mrs. Lars Hanson and brother Cornelius Hanson, Waukon; Mrs. Albert Nelson, Cumberland, Wisc.; Mrs. Sever Johnson, Lansing, besides 16 grandchildren, two great grandchildren and a number of nieces and nephews.

Mrs. Hanson was one of Lansing's most beloved ladies, always devoted: to her home and church. She was very hospitable and ready to help wherever needed. During her declining years she enjoyed the visits of neighbors and friends at all times and was fortunate in having good health up until a year or two ago.

She had been a resident of our town for over 30 years, and for the past 20 years she had lived with her daughter.

Brief funeral services were held at 12 oclock noon, Monday, at the home on South Third street, and a later service at the West Paint Creek church about 1;00 oclock. Rev. Lee, resident pastor of the N. E. L. church officiated at both services. Interment was made in the family lot in the cemetery nearby.

No source given for the obit - likely a local paper. The photo was posted with this obituary.

Mrs. Karen Hanson died her Sunday (Feb 9) and had she lived until May 10 she would have been 99 years old. As far as we know, she was the oldest resident of Allamakee county. For the past 40 years she has made her home with her daughter, Mrs. Sever Johnson and the best of care was given her. For the past two years she has been able to see little, only perceiving light from dark and her hearing was not so keen.

As Karen Holen, daughter of Mr. and Mrs. Knudt Holen she was born near Oslo, Norway, May 10,1842. When she was 22 years old, she set sail for America, the only one of her family to come at that time. The trip took seven weeks. She came direct to Allamakee county where she had an uncle, Ole Olson living near Elon.

The next year Feb 2, 1866 she married Andrew Hanson and together they farmed near Waukon until his death in 1900. Mr. and Mrs. Hanson were the parents of nine children of whom four survive. She knew pioneer life from experience, working in the fields beside her husband and raising her large family, leaving no time for idleness.

Her greatest pleasure in her declining years was to have callers with whom she could converse in her native tongue, since she did not learn the English language. All callers were entertained with lunch with true Norwegian hospitality.

Direct descendents are three daughters , Mrs. Johnson of Lansing, Mrs. Lars Hanson of Waukon, Mrs. Albert Nelson of Cumberlund, Wis., and a son Cornelius of Waukon; 15 grandchildren and 10 great grandchildren who will cherish her memory.

Mrs. Hanson was a member of the Old W.P. Creek Lutheran church, from where the funeral was held Tuesday afternoon, with the Rev. A.P. Lea officiating. Burial was in the church yard cemetery. Casket bearers were her grandsons, Howard Johnson, Arthur, Emil, Clarence and Elmer Hanson and Chester Nelson. 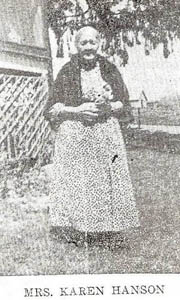