Word has reached here of the death in Denver the past week of Dr. Milford Hall Lyon, who was pastor of the Congregational church in Harvey from 1894 to '96. After two years in the Windsor Park church he went into evangelistic work in 1899, holding union services in the towns and cities throughout the midwest and east.

After 25 years in that field he retired to the pastorate of the Presbyterian church in Morgan Park, later in Daytona Beach, Fla., until he reached the retirement age of 70.

He died at the age of 86 in Denver on August 1 and was buried in Winina Lake cemetery in Indiana on August 6.

He leaves five children and his widow who will reside with her daughter, Mrs. Ralph Beebe in Naperville. Mrs. Lyon is a sister of Mrs. Peter Beck of Harvey.

Also on the website are several biographies & photos of Dr. Lyon. He was the eldest of 14 children; born in Waukon 2/10/1868; s/o Edmund Burke Lyon & Harriet Ellen Sisson. 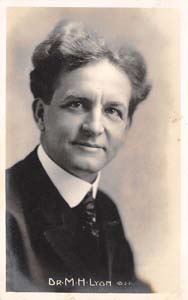