All at St. George High School were saddened as well as shocked by the news of the death of Jerry Smerud on the morning of Nov. 14.

Faculty and students of St. George wish to extend their sympathy and offer prayers for the George Smerud family of New Albin.

In his senior year Jerry received a Service Award from the school. In his dealings with teachers and others, Jerry was always a gentleman-an opinion and the remembrance of those who knew him.

Dean Smerud, brother of the deceased, is a junior at St. George.

***NOTE*** Jerry was the son of George and Betty (Weymiller) Smerud. He accidentally shot himself while attempting to either load or put away his gun while in his car, which was parked outside the family home in Houston County, MN, half a mile across the Iowa-Minnesota state line, around 1:30 a.m. He was able to make it to the house before collapsing. He was dead on arrival at a La Crosse, WI, hospital at about 2:00 a.m. 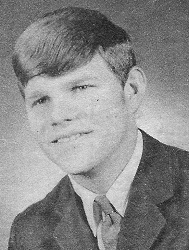