After months of patient suffering, Leo L. Fink passed away at Thornton Manor, Lansing, April 5, 1978, at the age of 88. Throughout that time he never lost his cheery humor and he greatly enjoyed the visits of family and friends, especially children.

He was born October 26, 1889, in French Creek township, Allamakee county, Iowa, to Nicholas and Margaret (Colsch) Fink. He was educated in rural schools and for most of his early years was a farmer and blacksmith. He was known throughout the area during those early years for his veterinary skills, and he nursed many a farmer's sick horse or cow back to health. Later, after moving to town, he was employed as a construction worker for Brennan Brothers.

After his retirement, he again took up his blacksmith work, sharpening plows for farmers until this work became too strenuous for him.

On April 17, 1912, he was united in marriage to Lydia Emma Meyer, who preceded him in death on October 9, 1958. To this union were born nine children, two of whom preceded him in death: Leland in 1934 at the age of nine; and LaVerne, who was killed in the service of his country December 7, 1944.

In November of 1959 he married Mayme Haerer, who has been in failing health for some time and is a resident at God Samaritan Home in Waukon.

Leo lived alone for several years before failing health forced him to take up residence at Thornton Manor in August of 1977. During those years, he was a familiar sight to townspeople as he passed his days sitting in a chair on the sidewalk in front of his home, or on his daily walk to the post office.

He was a ready and willing participant in his favorite table-slapping card game of euchre. He was affectionately watched over by his family and neighbors, but most especially by his granddaughter, Kim Johnson.

He is survived by two sons, Raymond and Lester of Lansing; and five daughters, Mrs. Arthur (Ethel) Fritz of Churchtown, Mrs. Dale (Dorothy) Foster, Fennimore, Wis., Mrs. Robert (Geneva) Johnson and Mrs. Curtis (Betty) Gramlich, both of Lansing, and Mrs. Irv (Jeannette) Rohde, Caledonia, Minn. Also surviving are 33 grandchildren and 41 great-grandchildren, all of whom will sorely miss their kind and loving father and grandfather. e is survived, also, by one sister, Mrs. Anna Hector, of Waukon, and many nieces and nephews. 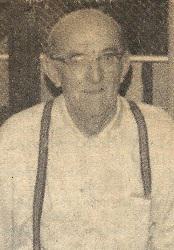