Waukon - The body of Cpl. Donald Baxter, Waukon soldier who froze to death in a North Korea prisoner of war camp in 1951, will be returned here for burial. Frank Baxter of Waukon has received word that his son's body came back to the Americans in an exchange of bodies with the Communists. Baxter's body has been positively identified and will be returned to the United States in the near future, Mr. Baxter was informed.

A fellow American prisoner of war is on trial before a court-martial in New York City on charges of murder and collaborating with the Communists. Gallagher is accused of throwing Baxter and another dying war prisoner out of the barracks to their death in 40-below-zero weather at camp No. 5 at Pyoktong in February, 1951.

Military Funeral For Sgt. Donald Baxter Is Held at Waukon

Waukon - A military funeral was held Tuesday for Sgt. Donald T. Baxter of Waukon who died in a Communist prison camp during the Korean War. Burial was in the family plot in Mt. Olivet Cemetery.

Sgt Baxter was one of two prisoners for whose death Sgt. James C. Gallagher, 23, Brooklyn, N.Y., was sentenced to life imprisonment last week in New York.

Baxter was born here June 3, 1931. He was sent to Korea in November, 1951, was taken prisoner shortly after and died the following February.

He is survived by his father, Frank Baxter, four brothers and three sisters. His mother died in 1941.

~Note the conflicts in the two news articles - rank and year of death. He may have received a posthumous promotion from Corporal to Sergeant. The 'Woodmansee' book gives year of death as 1951. Researchers should verify the information for correctness. 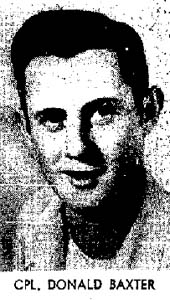