Mr. and Mrs. Elmer "Mike" Olloff of this place received a letter from the War Department telling of the death of their son, Staff Sgt. Donald L. Olloff of the Signal Corps, who died in a prison camp in the Philippines May 17, 1942, who was taken prisoner at the fall of Bataan. Staff Sgt. Olloff enlisted for foreign duty Sept. 5, 1939 and was shipped overseas Oct. 4th, 1939.

He was born Jan, 1, 1919 in La Crosse, Wis. His home being in Lansing, he attended the public schools there and graduated from high school with the class of 1936, and spent two years in the CCC camps at McGregor, Cresco and Decorah.

Deceased is survived by his parents, a twin brother PFC. Richard L. Olloff, serving with the U.S. Army in France, and three sisters, Mrs. Herbert Brooks of Bismark, Mo., and the Misses Vera and Lucinda, of New Albin. 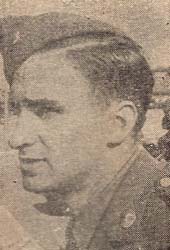