Leonard Lee Roffman was born February 23, 1924, in Franklin Township, rural Postville, Iowa, the son of William H. and Nellie M. (Fish) Roffman. He was baptized at the Canoe Ridge Lutheran Church and attended country school at the Red School and Franklin No. 11. Following school he worked for several area farmers.

On September 25, 1943, he married Kathryn Marie Gordon in Decorah, Iowa. They were the parents of Janet, Barbara, and Sharon.

From December of 1943 until December of 1945 he served as a Private First Class in the US Army with the 28th Infantry where he saw action in the Ardennes, Rhineland and Central Europe and was awarded the Purple Heart.

Following the service, Leonard returned to northeast Iowa where he began farming on shares and later purchased a farm in the Ferris Mills area between Waukon and Decorah. While continuing to farm, he also worked for Roverud Construction of Spring Grove, Minn., and hauled canned milk for the Decorah Creamery. He later built a garage on the farm where he repaired autos, machinery, and engines for a number of years. Leonard and Kate moved to Waukon in 1978 where he drove school bus for 14 years. Leonard was a member of the VFW.

Note: The obituary for Leonard Lee Roffman (above) does not include the portion of the obituary which included the survivors. There was also a picture that will be included here. The information is: 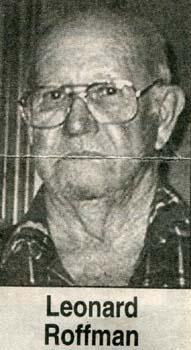