MASON CITY  Karen Lair remembers the day the telegram arrived. She was 10 years old at the time.

"I came home from school and saw my mother crying. A neighbor friend was there and so was a priest," she said.

They had just learned that Karen's brother, Kenny Meacham, serving with the Marines in Korea, had been badly wounded. Shrapnel had severely damaged both of his legs.

He was wounded at Bunker Hill, the first major Marine ground action in Korea, in September 1952.

"He said an enemy soldier kicked him and thought he was dead so he left him alone. Otherwise he would have been killed. Then someone rescued him and saved his life," said Lair.

She said Meacham didn't talk much about the war when he got home, but when he did, "He always talked about Bunker Hill."

He was flown by helicopter to Japan and then to a hospital in San Francisco.

"He called home from San Francisco and I answered the phone. I was the only one home. He told me he would call back at 7 o'clock that night and for me to make sure the whole family was there," said Lair.

Meacham was eventually transferred to Great Lakes Hospital near Chicago where doctors told him he would probably never walk again. Lair remembers the family traveling by train to visit him in the hospital

"When he came home, he went to the Red Wing shoe store in Mason City and bought boots that laced tightly all the way to his knees. He began walking. Nobody was going to tell him he couldn't walk again," she said.

Meacham went to Hamilton College and got a degree in accounting and worked at that for a little while.

"But his first love was farming," said Lair. "He purchased a farm in Plymouth and lived there the rest of his life," she said. He died in June 2014.

Lair said he walked with a bit of limp in one leg from his war injuries but it did not stop him from his work on the farm.

Asked what she remembered most about her brother when she was growing up, she laughed and said, "He was a toughie. He was a 'rassler.' He was a North End kid." 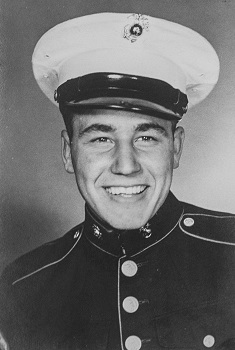