They Served With Honor: Rockwell vet 'wouldn't give up the experience for anything'

ROCKWELL  Although Mel Kruckenberg didnt speak much about his time in Korea, his children helped him fill a scrapbook of memories from the war before he died in 2014. Kruckenberg was drafted into the Army on June 4, 1952, and after stateside training was sent to the 40th Infantry Division training center in Chuchon for about a week, according to an autobiography the Rockwell man wrote about his military service. From there, he went to the front line in the Punchbowl, a bowl-shaped valley south of the Korean Demilitarized Zone, where he was assigned to the A Battery of the 625 Artillery.

Although the pay wasnt much at the time  $145 a month plus $45 combat pay  Kruckenberg was pleased with the food.

The first morning I went to breakfast, I was going through the chow line and they asked me how I wanted my eggs done, he wrote. I didnt expect that.

In charge of communication, Kruckenbergs first duty was working on the wire sections switchboard. Later as a wireman, he went to the Main Line of Resistance several times a month.

A buddy of his was killed there, hit by a mortar shell as he looked through a little window in the basket.

It blew his head off, Kruckenberg wrote. The bad thing about this is he could have been home.

After receiving the Bronze Star for laying wire under fire, his friend re-upped for six more months in Korea.

In May 1953, Kruckenberg had to help load weapons during an advancement.

All of us wire men had to go to the gun crews and help load the 105s, he wrote. We didnt know much about it but we helped anyway.

The night of the ceasefire in July 1953, Kruckenberg said the enemy shot everything they had at us before going quiet at 11 p.m.

The next morning we went up on the line, the North Koreans were waving at us and we waved back, he wrote.

The rest of his time there, Kruckenberg laid new wire just as like if we were at war, and moved around often.

His battery commander asked him if he wanted to re-enlist and stay six more months in Korea.

I said, no, I wanted to get back to Iowa, wrote Kruckenberg, who achieved the rank of sergeant. He received word in December 1953 he was going home. Once back home, Kruckenberg worked at AMPI for 44 years until his retirement in 1996. He was a 60-year member of the American Legion Gallagher Post 208 in Rockwell and a lifetime member of the VFW in Mason City. As an active member of those organizations, Kruckenberg was often part of Veterans Day programs at schools.

Kruckenberg recalls in his autobiography a conversation he had on that holiday in 1998 with a friend who also served in Korea. I told him I didnt like being there at the time, but I wouldnt give up the experience for anything, he wrote. A school teacher in front of me turned around and said, Just like school, huh?

His son, Patrick Kruckenberg, remembers him as a quiet man who had silent victories.

He was proud of his service and his scrapbook, daughter Kris Kruckenberg said via email. 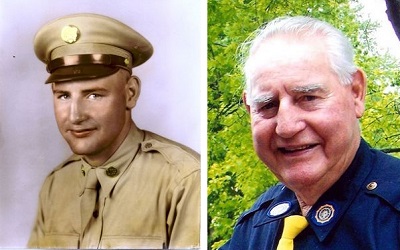