Plans were made in 1869 to erect a Presbyterian Church at Defiance Hill located three miles northeast of town. About this time a branch of the Northwestern Railroad was being built from Clinton to Anamosa through the Midland Valley, and a station would be built starting a new town, now Onslow. As this would be a more central location it was decided to give up building plans at Defiance Hill and build in the new town. Some of the Defiance members left to help start a church at Bethel or Frozen Hill. It was organized in 1870.

In 1871 a committee appointed by the Cedar Rapids Presbytery met at the John Paul home, a mile and a half southeast of town, and organized the Presbyterian Church.

The first worship services were held in the Paul home and later moved to the new train depot in Onslow. Sunday School was held in various homes.

The church was built on the present site in the Franks Addition at a cost of $2,200. Through a grant of $500 from Presbyterian missions, donation of church site by Mr. E. M. Franks, and concentrated efforts of the members, the church was dedicated free of debt in November 1872. Dedicatory services were conducted by Rev. T. H. Marshall of Dubuque. The carpenters were George Chase, Deb Chase, and Joseph Long. The pulpit furniture was provided through the efforts of ladies of which Mrs. E. M. Franks was chairman. It is related that a monk from Dubuque was visiting in the Franks' home on business and he donated $20 of which sum was used to purchase a bible for the pulpit.

The charter members received by certificate from other churches were: John and Margaret Paul, Mrs. Sarah Woodyard, Mrs. Francis Paul, Mrs. Grace Tasker, Mrs. Sarah Franks, Mr. and Mrs. John Sim, Mr. Robert and Mrs. Ellen McCready, Mrs. Isabel Smith, Mrs. Mary J. Tasker. Rev. J. L. Wilson of Scotch Grove was the first minister. In 1872 the church secured Rev. A. K. Baird of Wyoming. For a number of years the church was connected with this same pastorate. About in the year 1883 the connections were changed so then the Bethel or Frozen Hill church was affiliated with Onslow until it was abandoned in 1939. At this time most of its congregation united with the Onslow church. There was a resident minister until 1954 when again a pastoral relationship resumed with the Wyoming church.

The church became one of a group of eight known as the East Cooperative Parish whose purpose was to promote the Program of National Missions. A Christian Education Worker was employed to serve this parish in the 1950s. 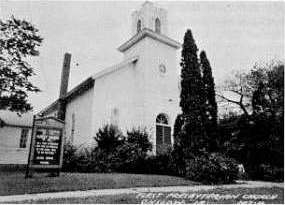 Over the years the church has received many structural improvements. In 1914 the church was electrically wired. In 1919 a basement was added and a furnace installed. In 1921, the tall steeple was struck by lightning and replaced by a modern square cupola in which the bell was housed. During time of these repairs being made, services were held in the Methodist Church.

The building received a complete renovation from sanctuary to basement in 1948. New pulpits, altar, lectern, hardwood floors, frosted windows were added, ceilings lowered, and walls repainted and refinished. Seats were rearranged for a center aisle with wine carpet laid to the altar, and new oil furnace was installed. The total cost of these improvements amounted to $4,500 which was paid by contributions from the Christian Service Guild and the members of the congregation. When this project was completed, although a bit belated, it was decided to celebrate the church's 75th anniversary. 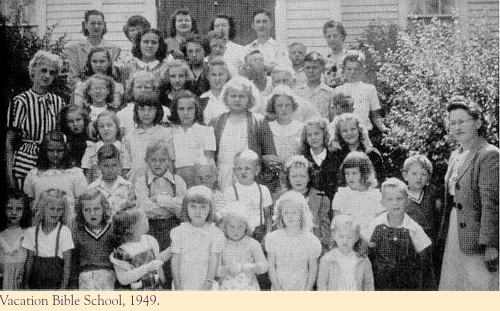 The congregation felt the need of added space for Sunday School rooms and social affairs. In 1955 it was decided to undertake a large project by building a north and east wing which included three classrooms and a pastor's study. At the same time the dining room was enlarged and new kitchen installed in the basement. Much of the labor was volunteered and expense covered by donations from the congregation. 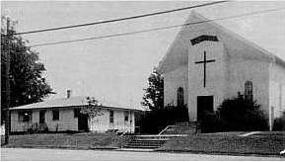 An extensive improvement was made in 1964. The old fashioned cupola was removed and the roof was projected out over the front entrance giving it a more modern appearance, A modern cross was mounted above the front doors and finished redwood to match the doors. Interior work included new floor tile for the basement and entrance hall and all repainted. This project cost $1,600. In 1965 new aqua carpeting replaced the wine carpet. 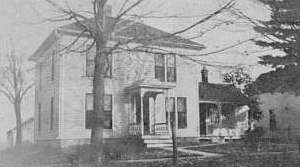 The first manse was sold in September 1956 for $4,000. The proceeds were placed in the bank and designated it be set aside until a later date, in a separate fund, to be used toward the erection of a new pastoral residence. A new modern home was constructed on the lot north of the church, this was made possible by volunteer help, pledges and donation from the congregation. It was ready for occupancy in October, 1966.

The church groups have been well organized. An active Sunday School has always been maintained. The superintendents serving over the longest terms were: Mrs. Jeanette Sim, Miss Grace Maple, Mrs. Jessie Brown McMaster Tompkins, and Mrs. Mildred Streeper Dreibelbis. Many summer volunteers workers carried on additional religious teaching and crafts in their Bible schools and closed with programs, exhibits, and picnics.

In the early history of the church, the young people's group was called Christian Endeavor, they met regularly each Sunday evening. In later years the name was changed to Youth Fellowship with meetings held every other Sunday evening. In 1960 the Onslow and Wyoming Youth Fellowships merged. The purpose of the group is to bring a greater understanding of religion among our youth and to share our faith in God and the work of the church.

The woman's organizations of the church first included the Ladies Aid which was formed in 1886 and reorganized in 1906 as the Ladies Guild. The Ladies Missionary Society was organized in 1890. In 1945 they merged and were named the Christian Service Guild. The first minutes we have are of the March 31, 1920 meeting. There were 13 members and 3 visitors present. At this time they called themselves the Women's Missionary Society. They met mostly in homes. Each meeting was opened with a scripture reading followed by a "season of prayer." They did white cross work as a service project. The clothing drives were very useful even then. The May breakfast was the custom at this time. Their programs were keyed toward learning more about the missionary work in their country and in foreign countries. Their community spirit was wonderful. They sang their songs and took a very active part in helping needy families. They had an official welfare worker for the Guild. The women of the church have been very active through the years serving Mother-Daughter banquets, annual chicken and steak suppers, holding bazaars, producing plays, serving lunch at farm sales and generally doing their part in helping with the church finances.

Twenty-eight pastors served the church through 1970. The Reverends: