A plaque commemorating the first troops from Jefferson County to enlist for the Civil War will be rededicated at 10 a.m. Saturday in Howard Park.

Fairfield resident Dick DeAngelis was saddened to see the plaque fall into a decrepit state over the years.

"It was looking awful, with the cement crumbling under the small stone that the plaque was attached to," he said. "I couldn't stand seeing it that way, so I asked people if I could undertake a project to fix it."

DeAngelis enlisted the help of many people to repair the plaque and supporting stone including Robert Estle, Dennis Kossow, Kent Whitney, Pam Craff and Calvin Todd.

"This means something to me," DeAngelis said. "This is a great story about the men who volunteered together at Howard Park to train for what they hoped would be a short war. It ended up being a major war."

"This was the drill
ground of the first
company of volunteers
from Jefferson County
to respond to President
Lincoln's call for troops
in 1861.
Company E, Second
Iowa Infantry."

The plaque indicates it was erected by the Daughters of Union Veterans. 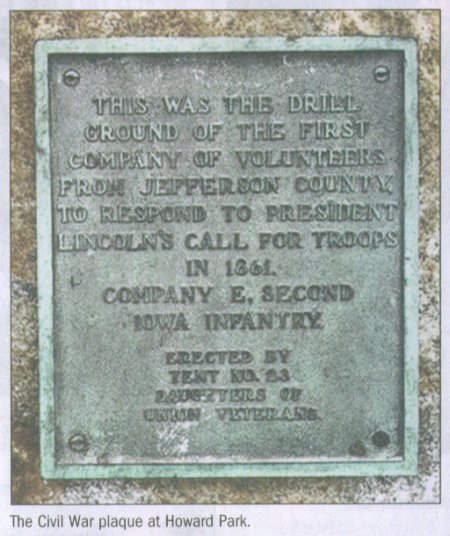 A historical monument in Fairfield that had fallen into disrepair has been revived with a new look and more prominent location.

A plaque in Howard Park commemorating the first volunteers from Jefferson County to fight in the Civil War was rededicated Saturday morning. The plaque was previously mounted on a stone on top of a block of concrete in the middle of the park. After noticing how badly cracked was the concrete base, a group of volunteers set about to give the plaque a sturdier foundation, and move it so it would grab the public's attention.

The plaque was put on a new stone many times larger than the original, and moved from the middle of the park to the southwest corner, near the sign for Howard Park.

Local filmmaker and Fairfield resident Dick DeAngelis led the rededication ceremony on a rainy Saturday morning. DeAngelis became interested in repairing the plaque after looking through a list of the county's monuments on a website that tracks the condition of all Civil War monuments in Iowa.

The website lists seven such monuments for Jefferson County, four in Fairfield, and one each in Glasgow, Libertyville and Lockridge. DeAngelis and Stan Plum, of the Carnegie Historical Museum, believe the monument in Howard Park was likely built in 1915 on the 50th anniversary of the end of the conflict.

"This was the drill ground of the first company of volunteers from Jefferson County to respond to President Lincoln's Call for Troops in 1861," reads the plaque.

This monument website DeAngelis found also contained a description of the Howard Park plaque, which noted that the base of the monument was breaking up when the website designer visited it in 2010. The website also included a photo of the monument, showing several cracks in its foundation.

"I was embarrassed at that," DeAngelis said.

DeAngelis worried that the poor state of the monument gave the impression that preserving veterans' history was not important to the community, which is "exactly the opposite of how this town treats its veterans." He wanted to show that this history really does matter, and that the plaque deserved a more dignified presentation than the decrepit concrete block it was on.

"My feeling was that it wasn't being looked at anymore," DeAngelis said. "Nothing about it was attracting a person to visit, and it was in disrepair on top of that."

DeAngelis talked to several local people who deal with stone and monuments. Robert Estle, who gave the stone for the county's Freedom Rock outside the courthouse, donated a stone to use as the plaque's new base.

"I told Robert we were willing to pay him, but he said he wouldn't take any money for it," DeAngelis said.

DeAngelis consulted Whitney Monument Works about how to transfer the plaque from the old stone to the new. Dennis Kossow and Matt Nelson volunteered their time to carefully remove the plaque from its original location and secure it to the new stone provided by Estle.

"We made the decision early on that we shouldn't clean the plaque by putting Brasso [metal polish] to alter it in any way," DeAngelis said.

DeAngelis said the monument is in much better shape now because it's just the plaque attached to a stone.

"That was a better long-term solution because now we won't have to repair concrete every 10 years," he said.

DeAngelis said the new monument is more eye-catching, and he hopes it will attract more interest from people who pass by Howard Park.

"People can learn about our history just by casually walking through town," he said. "I always think of Rome and how you see its modern-day traffic on one side, and then you turn to see the Colosseum. This monument is a nod to our past, the people who came before us."

DeAngelis noted that, though Civil War monuments tend to focus on the soldiers who fought, it was important to remember the women who stayed behind, who not only had to raise children on their own but perform all the tasks on the farm.

"And this was during a time when people didn't always make it through winter," DeAngelis said. "This plaque honors the families that made those sacrifies." (sic)

Whent he Civil War began in 1861, Howard Park was a drill ground for Union soldiers. Either just before or just after the Civil War, the railroad came to town. DeAngelis believes this occurred in 1867, two years after the end of the war.

Shortly after the war, Franklin School was built on the grounds. Plum said the school was built with bricks mined locally, and within a few decades had fallen into disrepair. The school was torn down in 1911. The Civil War monument was installed in 1915 where the school building would have stood.

The same year that the school was demolished, the Chicago, Burlington and Quincy Railroad purchased part of the property from the city of Fairfield. Elmer Howard, a prominent Fairfield citizen after whom the park was later named, struck the deal.

Howard was at one time vice president of CB&Q Railroad, and also Fairfield's mayor.

Plum remarked that, in the 1960s, the city council wanted to pave the park and turn it into a parking lot, but a closer inspection of the deed revealed that the city must maintain the grounds as a park forever.

"Elmer Howard reached out from the grave and said, 'No, you can't do that!'" Plum joked. 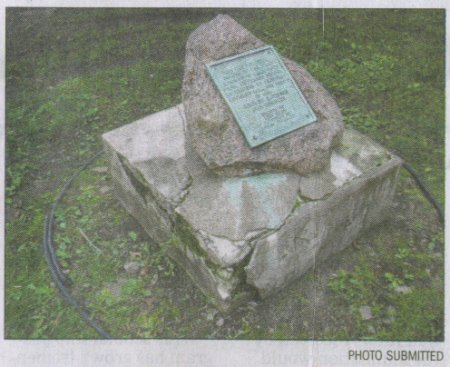 This photo, taken in 2010, shows the Civil War plaque in Howard Park at its original location
in the middle of the park and on top of a concrete slab. 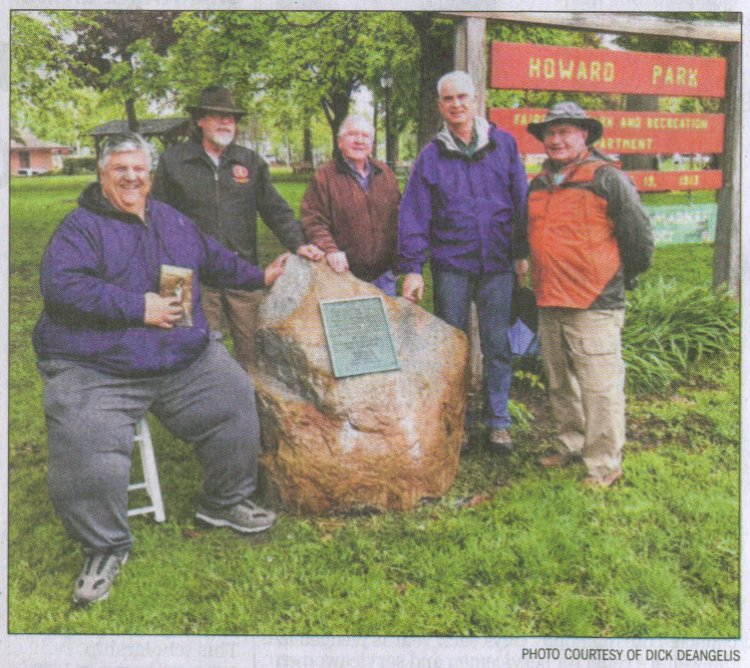 This plaque, with its new stone foundation and new location, was rededicated during a ceremony Saturday morning in Howard Park.
From left are Dick DeAngelis, Stan Plum, Don Hall, Ed Malloy and Dave Neff.

This page was created on 25 May 2019 and is copyrighted. The page may be copied and used for personal purposes but can not be republished nor used for commercial purposes without the author's written permission.