Roger Kubik is once again working on the Bonnifield Log House in Old Settlers Park to help the 175-year-old structure remain a visible link to Fairfield's history.

This time, the Birmingham resident with a passion to restore these types of old structures, is working on the east end of the old house.

"It was in the worst shape," he said.

Kubik explained he and Kevin Phelps are replacing a couple of the original logs up about 12 feet near the top of the wall and rechinking the spaces between the logs down the rest of the wall.

The rotted logs are being replaced with two 16.5-feet white oak logs donated by Nelson Smith, who lives near Brighton.

"When he heard what we were doing, he volunteered them because his great-great-granddaddy donated this log cabin to the city," said Kubik.

The Bonnifield Log House, built in 1838 by the Rhodam and Nancy Bonnifield family to replace the makeshift cabin built the previous year when the family settled in what was to become Jefferson County, is known as the oldest still-standing dwelling of any white man in Iowa.

But the tiny house is probably better known as the place where Fairfield was named.

According to Fairfield history as recorded by Susan Fulton Welty in her book "A Fair Field," in March 1839, when city commissioners were visiting the Bonnifields, they described the "pretty prairie" of the new town, and Mrs. Bonnifield suggested the name Fairfield.

Welty wrote when Winfield Fordyce bought the Bonnifield land years later, he offered the long-deserted cabin to the Old Settlers Association, and the Bonnifields' son, West Benson Bonnifield, donated $500 to help relocate it.

Welty's book says the association bought 10 acres of land on the north edge of Fairfield in January 1908. Seven months later, volunteers dismantled the house marking each log so it could be re-erected correctly in the new Old Settlers Park, about 8 miles from its original location.

Because the move was such an early example of preservation in Iowa, both the log house and the park were listed on the National Register of Historic Places in 1986, and throughout the years, have been the site of many events, festivals and picnics.

One of the organizers, Margaret "Jane" Arends of Prior Lake, Minn., said the family gathering will be "a very informal reunion and celebration so we all can have fun. ...we'll be sharing stories and information."

The family reunion will begin at 10 a.m. Saturday with house tours, a stop at the Bonnifield cemetery, followed by a potluck dinner for about 50 family members at noon in Old Settlers Park.

The dinner will be followed by a public celebration of the 175th anniversary of the Bonnifield Log House from 1:30-4 p.m. Guests should bring their own chair, and the rain site will be in the Waterworks Park shelter.

The celebration will begin with the lighting of 175 candles on cupcakes, followed by a presentation of the log house's history and an explanation of present and future preservation plans.

The program will include "Fiddlin' Granny" Joann Ancell of Fairfield entertaining with music and quilt stories.

"Then it'll be time for the family's stories," said Arends.

But the reunion and celebration also were organized to help raise additional funds for the restoration and preservation of the cabin. The family was able to raise more than $10,000 while planning the reunion.

Programs, note cards and a limited number of the late Van Buren County artist Wendell Mohr's prints of the cabin will be sold during the celebration Saturday. Mohr's children, Paula and Thomas, donated the prints that were originally printed for the 1976 celebration of the cabin, said Arends.

The restoration work is expensive, admitted Kubik, mostly because of the specialty materials being used. A gallon bucket of the chinking material costs hundreds of dollars.

"It's not materials you'd usually find in a carpenter's truck," he said.

But, he continued, once work is completed, the house shouldn't have to be touched for maybe as long as 100 years due to the quality and durability of those materials.

"We're using the best method and materials for looks and longevity," Kubik said.

When the Bonnifields built the house, they used mud to fill in the gaps between the logs, but in later years, in restoration efforts, cement was used in the chinks. Now, Kubik and Phelps are knocking out the cement and replacing it with special material that will expand and contract in the weather and help keep out moisture. Moisture in the logs causes deterioration.

The men are also using the material to plug holes made by insects boring into the logs, and, to help prevent that type of damage in the future, they sprayed the whole structure with a chemical to kill the insects and stop them from reproducing.

"This will make a big difference to the building," said Kubik.

Kubik expects work on the east wall of the house to continue this week, and then he plans to work on the west wall, which, he said, also is in bad shape.

In past years, Kubik has worked on the back wall and replaced two logs at the bottom. Inside, he's replaced the floor.

The old floor was wooden planks sitting on top of logs lying on the ground. Kubik dug out the ground beneath the floor to a deeper depth, then laid concrete on a sand base.

"We used a vapor barrier so no more moisture from the ground can get into the cabin, and now it's ventilated so air can circulate from one end to the other," he said.

"We even slightly waved the floor," he said with a grin, explaining the old house leans, so a straight floor wouldn't have been the best way to go.

The house was reroofed about 12 years ago, but it needs to be done again. Kubik said squirrels, raccons or other animals have damaged the roof, and he pointed out a metal plate covering one of the bigger damaged spots.

The Old Settlers Association thought the county would be a more viable curator, and the terms of transfer of ownership stipulated the property continue to be used as a free public park for the citizens of Jefferson County, said Mark Shafer of the Jefferson County Historical Preservation Commission. That the county accepted ownership under those terms, he added, helps ensure preservation of the cabin.

Anyone who would like to donate to the ongoing preservation effort can send checks made out to Bonnifield Cabin Preservation Fund to the Carnegie Museum Foundation, PO Box 502, Fairfield 52556. The foundation manages the tax-deductible gifts.

For additional information about Bonnifield Log House and Old Settlers Park, visit www.jeffersoncountytrails.org/parks/waterworks.htm or call Shafter at the Carnegie Historical Museum at 472-6343. 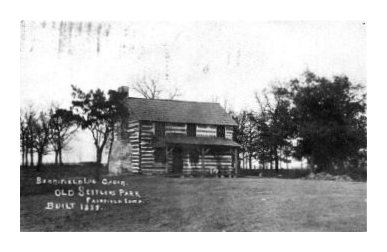 On old photo of the Cabin 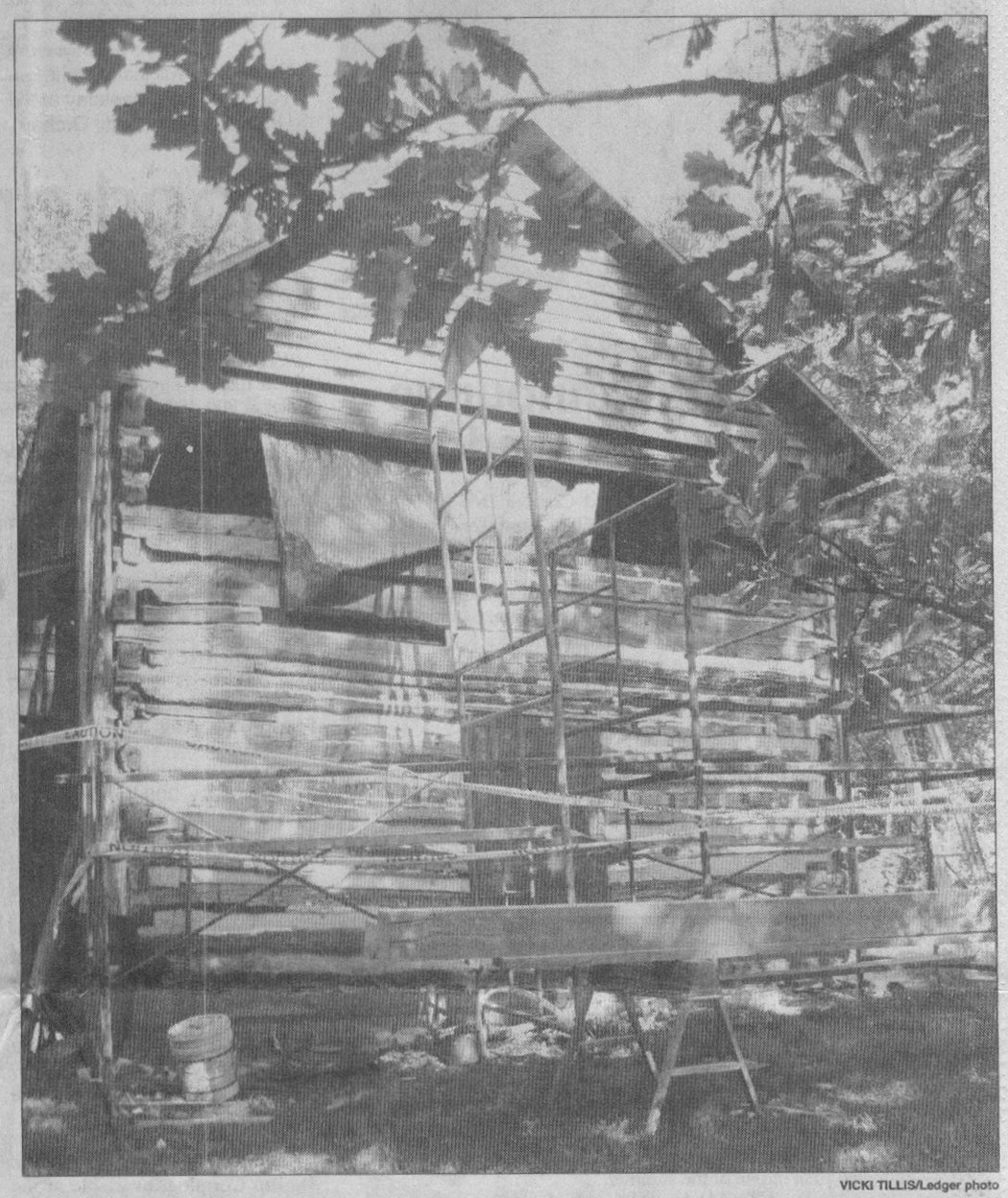 Rotted logs removed from the 175-year-old Bonnifield Log House sit on the porch. Pieces of the logs will be available to Bonnifield family descendants who want to take a piece of their history with them after their reunion and 175th anniversary of the house Saturday. 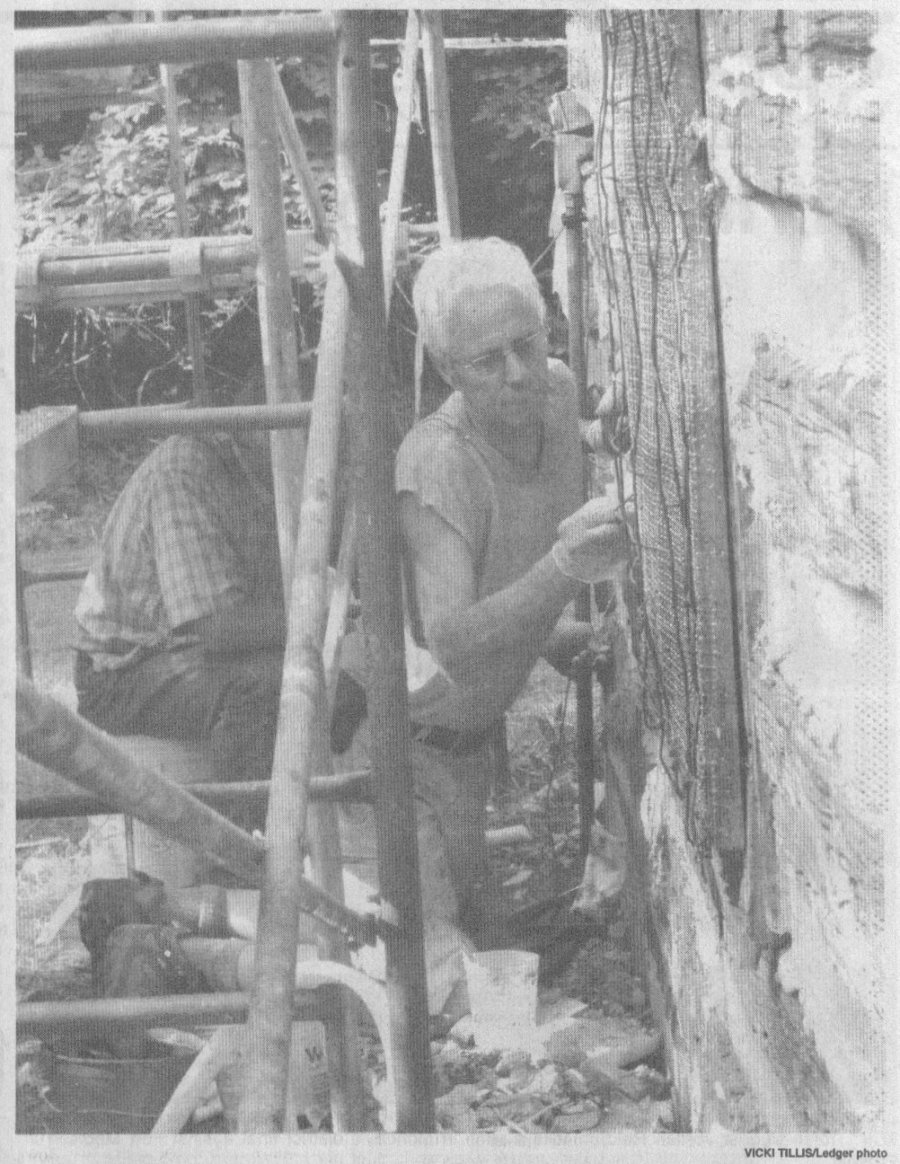 Roger Kubik, with Kevin Phelps in the background, hand patches holes made by boring insects in the logs of the Bonnifield Log House in Old Settlers Park. The 175-year-old historic house was sprayed with a checmical to kill the insects, which Kubik said will help with the problem.

Bonnifield family descendants gathered in July to celebrate the 175th anniversary of the building of the Bonnifield Log House.

A large portion of the donation resulted when a donor asked his company to match his donation to the Bonnifield Preservation Fund through the Carnegie Museum Foundation, a 401(c)(3) foundation.

Forty-six family descendants and their families gathered to celebrate the 175th anniversary of the building of the cabin. They were able to see the work of Birmingham resident Roger Kubik, who is currently rechinking the cabin with new material to extend the life of the historic log house.

A descendant of Anzaletta Bonnifield, Michael Cluney of Des Moines, shared his model of the cabin, and it is now on display at the Carnegie Historical Museum.

During the reunion, "Fiddlin' Granny" Joann Ancell of Fairfield entertained the families with her fiddling, and the families explored the cabin and exchanged family stories and histories.

Attending the reunion were descendants of William Bonnifield, Elizabeth Bonnifield Chandler, Anzaletta Bonnifield Nicholson and West Benson Bonnifield. They came from California, Minnesota, Missouri, Ohio and many parts of Iowa.

Special recognition was given to Keith Shafer and Mark Shafer, both Bonnifield Preservation Committee members, and Elizabeth Long who lives on the original site of the cabin. The family historians thanked Verda Baird of Fairfield for her many hours of Bonnifield research, and Richard Thompson collected oral histories from the Bonnifield family.

The family also appreciated the special work of Fairfield park superintendant Pam Craff and her crew during the weekend.

The Bonnifield Family concluded the celebration with a visit to the Bonnifield Cemetery east of Fairfield where the parents Rhodham and Nancy Bonnifield, son Arnold, daughters Sarah and Elizabeth and grandson Sulifand are buried. Judy Chandler Bowers of Missouri visited her great-great-great-grandmother Elizabeth Bonnifield Chandler's grave for the first time.

Tax-deductible donations for the cabin's preservation can be made to the Bonnifield Preservation Fund of the Carnegie Museum Foundation, PO Box 502, Fairfield 52556. The foundation is a 501(3)(c) organization. 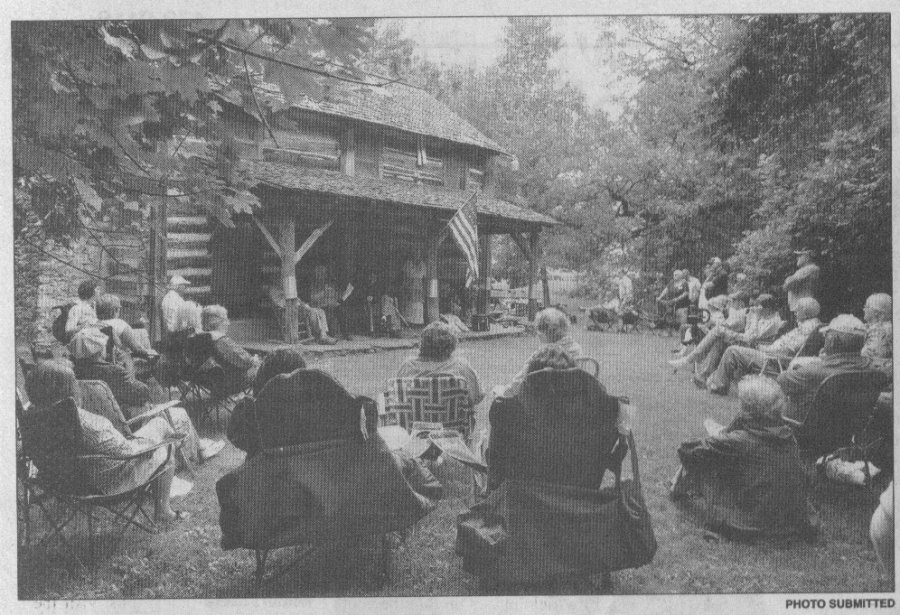 Bonnifield family descendants gather around the Bonnifield Log House in Old Settlers Park during their reunion July 27 to celebrate the 175th anniversary of the building of the cabin. 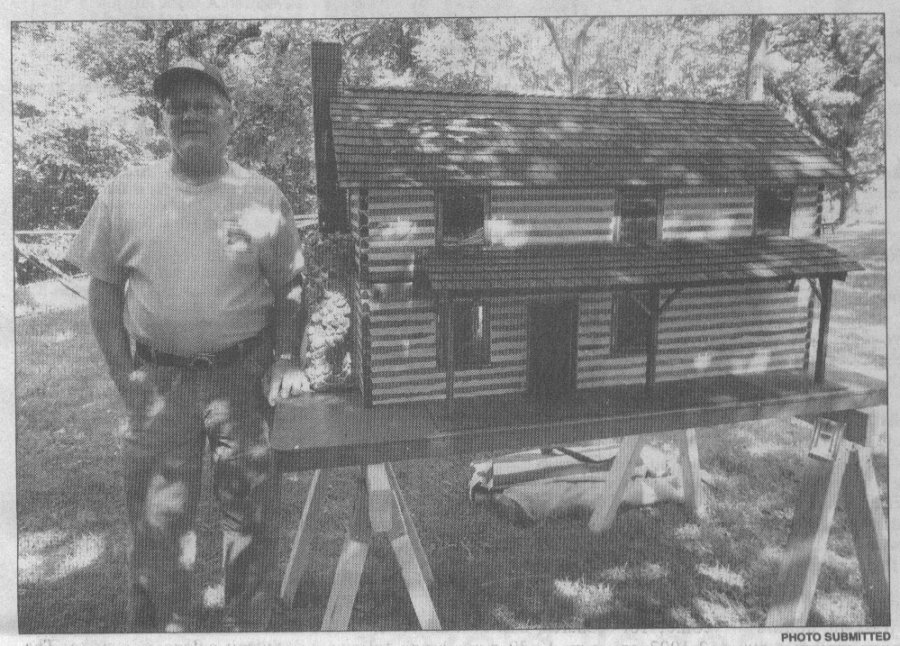 Des Moines resident Michael Cluney, a descendant of Anzaletta Bonnifield, shares his model of the Bonnifield Log House during the family's reunion July 27. The model is now displayed at the Carnegie Historical Museum. The family donated $10,500 to the Bonnifield Preservation Committee to help with projects to extend the life of the historic log house. The Bonnifield Log House was built in 1838 by the Rhodam and Nancy Bonnifield family to replace the makeshift cabin built the previous year when the family settled in what was to become Jefferson County. The historical log house is known as the oldest still-standing dwelling of any white man in Iowa, but is probably better known as the place where Fairfield was named. According to Fairfield history as recorded by Susan Fulton Welty in her book "A Fair Field," when city commissioners were visiting the Bonnifields in March 1839, they described the "pretty prairie" of the new town, and Mrs. Bonnifield suggested the name Fairfield. The cabin was disassembled and moved about 8 miles from its original location to Old Settlers Park in 1908, where it was re-erected.

This page was created on 27 Jul 2013 and is copyrighted. This page may be copied and used for personal purposes but can not be republished nor used for commercial purposes without the author's written permission.
I am the County Coordinator and the Webmaster, the one who is responsible for the IAGenWeb project for Jefferson County, Iowa. Please contact me if you would like to contribute to this database or if you note any problems with these pages.

Return to the Pictures Page