Named for: Little Turkey River southwest of the town site

Little Turkey was created in 1867 to serve solely as a post office. Located on the section line between Utica 14 and 23, various maps depict the "town," in either location. Calling Little Turkey a town might be somewhat of a stretch. Although it was never formally platted and never boasted a railroad depot, the town became a hub for local German and Czech families who immigrated to the area for farming.

As late as 1930 a school operated on the Joseph Koudelka property, called Utica #7. This would have been just to the north of the Little Turkey Cemetery (perhaps 1/8 mile north of 160th Street and west of Windsor Ave (County V62). While the community was not known primarily for mining, limestone deposits to the west of the site did offer some quarry work which attracted workers. Many of these made their stay in Lawler, although it is possible some called Little Turkey home.

The 1892 North West Publishing Co. Atlas shows most of the business activity located along present day 160th Street west of Little Turkey Cemetery. The furthermost marked location is the M. A. Hoaglund residence, with the blacksmith shop being located due east on the same property. The creamery is listed as the next building, followed by the cemetery and then school. (Burrus Brown is listed as the property owner at this time of the Koudelka property). Interestingly enough, this map shows a Methodist Episcopal Church in the same location as the present day noteworthy Catholic Church.

As it turns out, Assumption Parish purchased the Methodist Episcopal Church building in 1902, it having been abandoned sometime in the preceding decade. The first mass in the new Assumption of the Blessed Mary Parish Church occurred in March 1903, with the parish incorporating as the Assumption Church of Little Turkey in 1911. A new church building was completed in 1915, only to be damaged by a tornado in 1918. Rebuilt, the sanctuary served until 2008 when the parish joined five other Catholic churches to create the Christ Our Hope Cluster. Mark McGovern was the last resident priest in 1989. The church celebrate its Golden Jubilee in 2003 and is still used periodically. Current and former members look forward to the annual reunion picnic each August.

The town does indeed have two cemeteries. Little Turkey is to the north and St. Mary's to the south. The parsonage for the previous Methodist Church was located near the St. Mary's Cemetery. 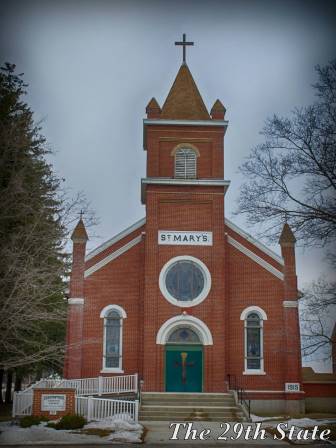 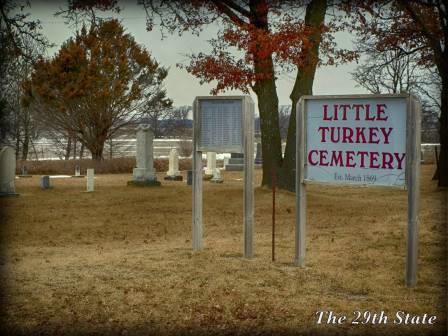