Excerpts from The Courts and Legal Profession of Iowa 1907

An attempt was made to organize the county in the Spring of 1853 an election being held and JK Rowley elected judge but proceedings having been irregular in some way the organization did not hold. In August of the same year a more successful attempt was made and the following officers were elected: James Lyon, county judge; SC Goodard, clerk; ND Babcock, prosecuting attorney; EA Haskell, treasurer; and Andy Sample, sheriff. The county seat was first located at a place called Bradford, July 14, 1854, by William McClintock and John B Onstine, commissioners.

In April 1856 an election was held and vote taken on the question of moving it from Bradford to New Hampton at which the latter town received the majority of votes. But the canvassers threw out the vote of one township, Washington, and thus decided it for Bradford. In the Spring of 1857, a second commission appointed by the legislature located it at New Hampton. Soon afterwards another aspirant for the seat of government came to the front in the town of Forest City and on April 5, 1858, a vote was taken resulting for New Hampton, but again the board of canvassers threw out the vote of Washington township and changed that of another and gave the majority to Forest City, but the question was taken into court and finally settled in favor of New Hampton and there it has since remained.

The first lawyer in Chickasaw county was GW Howard, who subsequently became state senator filling the vacancy caused by the resignation of Hon JH Powers to enter the military service during the War of the Rebellion. Howard was afterward appointed major of the Twenty seventh Iowa Infantry and served through the war. He removed to Waterloo, Iowa. The next attorney to locate here was FD Hall who was at one time prosecuting attorney of the county. AG Case was the next attorney who came to Chickasaw county and JH Powers was the fourth to settle here.

Julius H Powers was born in Rochester Vermont May 22, 1830. He removed with his parents when six years of age to Freedom, Ohio, and when twenty years of age to Berlin, Erie county, Ohio. He was educated in the Kingsville, Ohio academy, graduating under JK Graves, who was president at that time. He studied law with Walker & Gunkle at Dayton Ohio and also in the Cincinnati Law School, graduating March 15 1855. He was admitted to the bar in the Hamilton county, Ohio district court April 7, 1855 in the Chickasaw county Iowa district court at the June term, 1857, and the United States circuit court district of Iowa January 12, 1876. He came to New Hampton, Chickasaw county, and began the practice of law in 1857, and continued until July 1861, when he enlisted as a private in Company B Seventh Iowa Infantry. He was commissioned captain of Company I, Ninth Iowa Infantry September 18, 1861. He served in said regiment until April 1863. On July 19, 1864 he was commissioned by the United States war department commissioner of the board of enrollment for the Third congressional district of Iowa. He was elected senator in 1859 and served until he entered the United States army in 1861 regular session of 1860 and special session of 1861. In 1869, he formed a partnership in the law business with Samuel J Kenyon, under the firm name of Powers & Kenyon, which continued until 1881. He is a member of the Masonic Lodge of Tippecanoe of Ohio and Odd Fellows Lodge of New Hampton, Iowa. In politics, Mr. Powers is a republican.

William B Perrin was born in Berlin, Vermont January 19, 1839. He acquired his education in the Barre academy at Barre Vermont and at Dartmouth College Hanover, New Hampshire. He attended the law school at Albany, New York and was admitted there in 1867. He then removed to Burlington, Iowa where he was admitted January 1868, and later to Nashua, Iowa, where he formed a partnership with AG Lawrence, which continued from 1873 to 1882. Since that time he has been alone in the practice of his profession at Nashua. He is a member of the Grand Army of the Republic Loyal Legion and Knights of Pythias. Mr. Perrin is a republican, and was a member of the house of representatives Seventeenth and Eighteenth general assemblies, and of the senate in the Twenty-fifth, Twenty-sixth, Twenty-seventh, and Twenty- eighth general assemblies.

The full report can be accessed, searched, and/or downloaded as Google Books here. 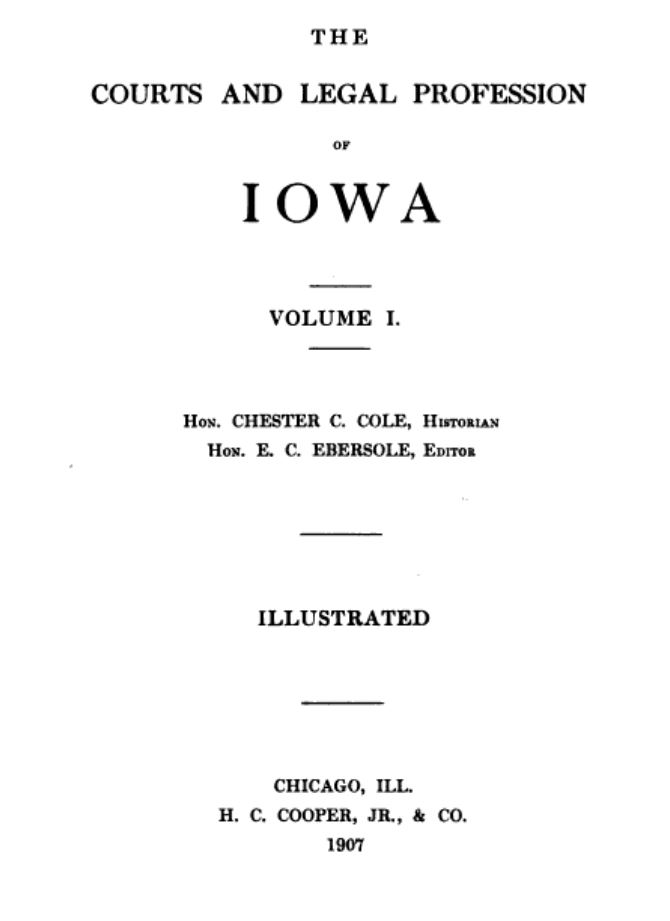